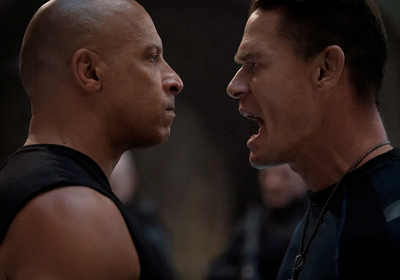 "This film knows its audience, knows what it is, leans into this and that makes it infinitely funny and watchable"

2001 was an interesting year, it's also the year that the original The Fast & The Furious movie came to cinemas. 20 years later here we are welcoming the 9th main line entry to the "Fast Saga" as it’s now referred to during its marketing. Most franchises can only dream of the longevity and dedicated audience the saga has behind it and in some respects (especially the cameos) this could be seen an attempt to tie all previous entries together.

I'm going to prefix that I am a little biased and I have also been a fan of the franchise and its over the top and sometimes a little too sweet notion of family being everything. Most of our main players return for the sequel, the exception of which being Dwayne Johnson who looks to be taking a break after the spin off Hobbs & Shaw. Without spoiling the story and its thrilling and often batsh*t crazy antics this film was an utter joy to watch from begining to end, its funny, dramatic and over the top but the cast lean into this and regularly call out that this amount of over the top action and carnage so it doesn't feel like its taken for granted.

The newest cast member is John Cena, known to the majority as a former multi-time wrestling champion, who much like Dwayne has transitioned into more and more film roles. Cena is more than impressive and fits in brilliantly with the mass amount of testosterone filled madness of his co-stars. He plays Jakob who is the estranged brother of Vin Diesel’s lead character Dominic Torreto.

Whilst I was initially weary of the use of the long lost brother trope which has been over used in the film industry it actually works very well in this context, which allows for some superb flashback scenes filling out Dom & Jakob’s back story and elements that up until now we've only seen alluded to.

It would pain me not to mention the small but important roles played by Jim Parrack (True Blood/ 9-1-1: Lonestar) & J.D. Pardo (Mayans MC) who both add weight to these flashback scenes.

Again without spoiling anything, if you are a fan of this series you're going to very much enjoy what is on offer here. It is however more of what the series is known for and if you are looking for a departure from this then it may not be for you. It’s also worth noting that Tokyo Drift which is often seen as the black sheep of the franchise due to its departure from its roots and focus on drifting is very important to many elements of the story, this also helps us catch up with some old but familiar faces.

The one thing I found was a little bit of a let down )which is usually top notch) was the soundtrack, The Fast Saga is known for its superb choices musically as well as the action on screen, previous examples include "See You Again" and "Danza Kuduro" which found there way into pop culture and became very popular. There doesn't seem to be anything that stands out this time which is a little disappointing.

Before I summarise I’d like to give a nod to one continual point which I feel is very noble, since Paul Walker’s death a large part of what was popular about the franchise is sadly no longer there. However, between the writers, directors & cast his memory is always respected and shown reverence. It’s refreshing in an age when everything is fast paced and people are easily forgotten.

Personally I had a great time watching this, this was my return to the big screen since Covid-19 set us back so much. This film knows its audience, knows what it is, leans into this and that makes it infinitely funny and watchable. Yes there may not be a huge amount of new ground but that doesn't matter in the end.

You'll leave with a smile and some huge questions regarding the already announced tenth entry which is earmarked to possibly close the series. If that’s the case then its been a hell of a ride for the last 20+ years.

I’d give this a 4 out 5 stars, or closer to a 7 out of 10 rating if that were possible. It had some flaws but in the end it’s a film we need after the last 18 months.. life needs to be fun and enjoyable again.