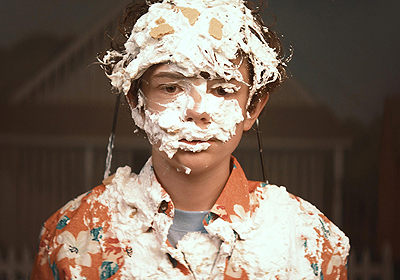 Openly celebrated at the Sundance Film Festival and nominated for best film at the LFF, Honey Boy is Shia LaBeouf’s open letter to his father. A journey through their troubled relationship that deeply affected his life and career.

The film follows Otis, a young Hollywood actor struggling with his career due to his alcohol addiction, after his umpteenth DUI and many fits of rage at work, Otis is forced to seek treatment once again at rehab to find the triggers to his destructive behaviour. Reluctantly he looks back at his childhood and his relationship with his father.

From this moment the film waves around past and present and it focuses on Otis as a successful child actor managed by his drunken convicted felon father James. Directed by Alma Har’el and written by LaBeouf himself, Honey Boy is a dramatic journey of self-healing and forgiveness.

While the film starts by showing Otis at the peek of his adult career, the story is pretty much set in the past to highlight all the traumatic event that shaped this young man into becoming a person enslaved by rage and resentment, unable to cope with difficult situations in a healthy way.

It is undeniable that with Honey Boy, LaBeouf is trying to open a window into his own life; the references to his own career, both past and present are evident. However, this is not a movie made to elicit pity or to make the audience feel sorry for the protagonist. On the contrary, it’s trying to allow the audience to peek into Otis’ brain to understand him better as a human being rather than just as an actor.

The conflicting relationship between him and his father James is portrayed with extreme clarity to convey raw emotions, particularly Otis’ strength and vulnerability when trying to please his father.

From the beginning it is clear that Otis doesn’t have a normal childhood. His father, acting as both guardian and agent, constantly pushes him to do more and to be better. No matter how hard Otis works, James is never satisfied.

The pressure on him is so high that Otis is forced to behave like an adult. But, when he talks back to his father and he reminds him of the fact that he is working for him, James lashes out and punishes him for being too headstrong and disrespectful.

This traumatic relationship and the pain caused by all the past events are what is triggering Otis’ rage and alcohol abuse. However, for him it is not easy to let go of the pain because that is what fuels his talent as an actor' or so he was led to believe by his father.

Being a story that verges near autobiography, it’s quiet easy to compare it with Labeouf’s life and public persona.

With Honey Boy it almost feels like the actor wanted to write a film to remind people how to separate the man from the actor; it is not a way to excuse his behaviour, but an explanation on how his craftsmanship comes from a place of pain. Erasing the trauma from his life might make him a better person, but it might also dim the light from his talent, and Honey Boy is another way to remind the audience just how good Shia Labeouf really is as an actor and as a writer as well.

His performance in this movie is completely free from any restrictions; it is extremely easy to pity this man who is completely dependant on his son but is still trying to control him, even though, between the two, his kid is more put together.

Shia’s time on screen with Noah Jupe is nothing short of great, probably because of the young actor supporting him.
Jupe is not scared to try everything Labeouf throws at him; every challenging aspect of Otis is fully embraced by Noah to such outstanding levels. Raw emotions are displayed on screen and the relationship between the two main characters feels real.

Labeouf opens a window into his heart and mind with Honey Boy, a glimpse into his past that challenges the audience to separate who is the actor from the real man really hiding behind all the fame and glory.