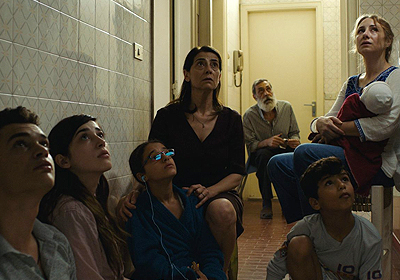 "moving and powerful film that offers a small window into the daily struggle faced by the people of Syria, a struggle that we all hope will soon reach its end"

The Syrian Civil War which has raged since 2011 is surely one of the most tragic episodes of the early Twenty First century, with it causing the deaths of thousands, the destruction of cities, the growth and spread of extremist groups and the largest refugee crisis since the Second World War. This seemingly unending tragedy is the backdrop of today’s review subject, Insyriated, a powerful drama that strives to tell the story of the wars, true victims, the innocent civilians of Syria.

Two Damascus families sharing an apartment attempt to live a normal life while enduring the daily trials and tribulations of the Syrian Civil War that rages outside their door.

With the Syrian war still currently ongoing with no apparent end in sight, writer/director Phillippe Van Leeuw has set himself an incredibly difficult task with this film. The task of trying to tell a story about the war without sensationalising the very real suffering of the Syrian people. However, Van Leeuw more than succeeds in this task, creating a carefully crafted work that manages to tell a human story of survival, adopting an almost documentary like approach with his story.

The film features no large battle sequences, nor even a simple gun battle. Instead, Van Leeuw decides to set his film almost entirely within a Damascus apartment complex, with the war largely being depicted as the quiet rumblings of gunfire and explosions. We witness the daily routines of the protagonists as they wake up, prepare meals and generally try to live normal lives, with these moments having a familiar sense of tedium to them. However, this tedium is regularly shattered by brief moments of sheer terror, as the war momentary moves closer to them, with the threat of a snipers bullet constantly hanging over them throughout the film.

Acclaimed Palestinian actress Hiam Abbas delivers a gives a powerful and moving performance as Oum, a mother attempting to create as normal a life as possible for her family, despite the carnage outside. Abbas portrays her character as a strong matriarch whose strict authority has kept her family safe for some time, yet she is not a flawless character with her often being forced to make heart breaking decisions for the greater good. A particularly horrific scene comes when she allows Halima, young woman staying with her to essentially be raped by a local militiaman, refusing to help for fear that the whole family might be murdered if she did. It’s a gruelling scene to watch, with Abaas perfectly portraying the painful internal conflict that Oum endures because of her actions.

The film might not show the war directly, but it does not shy away from showing some of the harsh realities that many Syrian people will have had to endure for the last several years.

The aforementioned scene in which Halima is sexually assaulted is a particularly difficult scene to watch, especially when you realise that no one is going to save her. It’s a dark and bleak film that addresses the difficult decisions that some might be forced to make in difficult situations, even if those decisions might seem morally dubious or downright reprehensible.

Wisely the film does not attempt to make any political statement about the war which has very much divided the international community. The film simply strives to tell a human story about a day in the life of a family that doesn’t want to take a side themselves, they just want to survive.

Led by a stellar performance from Hiam Abbas, a simple yet elegant story and with subtle and careful direction from Phillpe Van Leeuw, Insyriated is a moving and powerful film that offers a small window into the daily struggle faced by the people of Syria, a struggle that we all hope will soon reach its end.