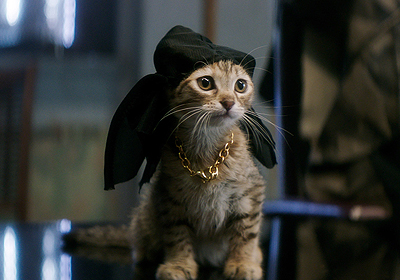 Drugs, guns, gangsters and a kitten. It’s a pretty intriguing comedy set up. Two friends Rell (Jordan Peele) and Clarence (Keegan-Michael Key) have a guys weekend planned; Clarence's wife is away and Rell is recovering from a brutal break-up, said recovery helped in part by a stray kitten that shows up on his doorstep that he has named Keanu.

Unfortunately, as they return from their first night out they discover Rell’s home has been broken into and it seems the only thing stolen was poor fluffy little Keanu. As it happens we the audience know that Keanu escaped from a drug den during a shoot-out in the opening of the film but our heroes are oblivious to all this as they go in search of their lost kitten. Surmising that Rell’s weed dealer is somehow involved the two of them go on an undercover mission in a drug den to save the cat, becoming increasingly embroiled in the lives of the gangsters they have unwittingly befriended with the poorly planned web of lies they are weaving.

So it’s two suburbanites stumbling into a very serious situation and finding themselves in over their heads to comical effect. Not an overly original concept but a classic and rewarding one that’s ably employed here. After lying about their identities our heroes are tasked to supervise some wayward youths of the gang on a drug deal and everything snowballs from there.

The central joke is two modern suburbanite black guys who have never been anywhere near “the hood” in their lives attempting to blag their way around a world they’ve only really ever seen in the movies. It’s an oddly refreshing take to see some non-cliché minority characters interacting with some more cliché ones and their observations upon each other, and this somewhat unique angle is why it’s a shame this isn’t a better movie. Ultimately the plot doesn’t make a whole lot of sense and the movie takes very few risks with the material, with the exception of one way off the rails cameo that I won’t spoil for you.

There’s a cute gag where Rell is making a cat calendar with Keanu reenacting famous movie scenes, a calendar we were all gifted with at the screening, but it’s a joke that was done better with the baby in the Seth Rogen movie Neighbours (Bad Neighbours in the UK) and actually as I think about it a running theme of this movie is ideas that have been done better elsewhere. In addition, this movie is a little tame, other similar genre “fish out of water” comedies have pushed the boundaries but you pretty much get exactly what you’d expect here.

But this isn’t a bad thing, I maintain that an average comedy (and this is only average) is still better than the average of any other genre. It’s still very funny, there’s no weak links amongst the cast or characters and it’s easy to be drawn into the world and the plight of Rell to save the most adorable kitten you’ve ever seen, who it’s oddly endearing to watch run through the various over the top action sequences, but you aren’t missing a modern classic if this one passes you by.