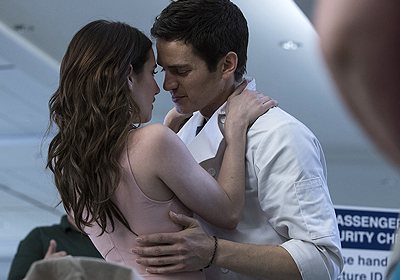 If you’ve ever wondered what Romeo & Juliet might look like if the two warring families were the heads of opposing pizza restaurants in Toronto, then Donald Petrie’s romantic comedy Little Italy will provide you with an answer.

Set in the district that lends the film its title, Leo (Hayden Christensen) and Nikki (Emma Roberts) are childhood best friends whose families run the pizzeria ‘Pizza Napoli’. When their fathers fall out, they set up rival restaurants next to one another. Nikki meanwhile moves away to pursue a career as a chef, but when she has to return for contrived visa reasons, feelings between her and Leo are ignited once again.

From around fifteen minutes in you can see exactly how the plot is going to play out (you can probably guess the broader strokes already) and in the most predictable of genres, there is little attempt to try anything new with the set-up. It even climaxes at an airport. The somewhat episodic structure moves from one absurd set-up to another, with a football/drinking game in the pouring rain and a Friday night insult fight being particular standouts.

The dialogue is not sharp enough to be funny, while the characters are borderline cartoonish. ‘That is such a stereotype!’ Nikki says to Campo in an early voiceover without any sense of self-awareness from the script.

Christensen and Roberts are likeable enough in the leads and do share some chemistry, but overall this plays out like an understudy to My Big Fat Greek Wedding. It’s harmless but instantly forgettable.