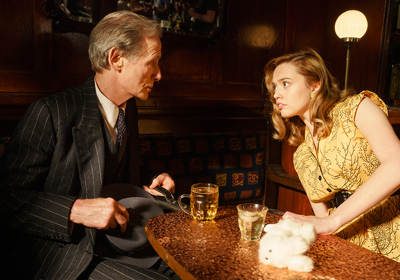 Adapted from the 1952 Japanese original Ikiru directed by Kurosawa, Living focuses on the importance of enjoying life to its fullest without any regrets, before it’s too late.

Set in 1953 London, the story follows Mr. Williams, a stoic and serious civil servant who has made his life all about rules and duty, until he receives a fatal diagnosis from his doctor.

After spending his whole life almost motionless in his routine, Mr. Williams is forced to face his mortality and decides to spend his last months on Earth enjoying small little ordinary pleasures and leaving a positive mark on the people he works with or meet along the way.

Directed by Oliver Hermanus and written by Kazuo Ishiguro, Living is an easy and beautifully acted story about reminding ourselves that a life half lived is not a life worth living.

There could have been no better actor and man to portray Mr Williams than Bill Nighy; his presence on the screen is one mixed between austerity and calmness. He glides between one scene and the other and fills every scene with his commanding presence without any effort. It becomes easy to believe Mr Williams' authority and reputation even just by the way he walks in a room. The moment everything changes for his character, however, brings a complete change in mood for the entire story. Looking to make up for lost time and steadfast in trying to leave a mark behind, Mr. Williams starts changing his habits and this is when we see Nighy shine in all his gentle nature and stubbornness.

The relationship with Margaret (Aimee Lou Wood) is pure and almost father like, Mr. Williams sees her as a person who knows how to enjoy life and just wants to spend time with her to learn how to live. Watching Aimee Lou Wood share the screen with Nighy is quiet simply lovely and heart warming.

In a world where we are pushed to always be serious, be professional and live life dedicated to work and success, Living just tries to remind us that life is short and what matters is enjoy every minute of it.