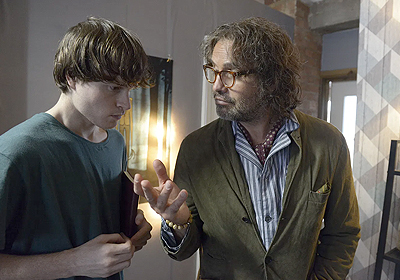 "despite my doubts within the film and losing focus on some parts, it is good for all who enjoy Sci-Fi/Thrillers."

The film is about Zel (Laurie Calvert), who is a lonely young man, suffering with social anxiety and starts a job at a members only club, as a car parking attendant.

After meeting with his mum for lunch he seems to be seen overlooking a female by one of his neighbours who offers to help change his life and overcome his social anxiety by having regular Lucid Dreams.

Upon watching this film, it started off grabbing my attention as it showed promise at the start of the film, but as I delved deeper into the film, I began to feel lost with the plot as there was one scene where I thought he was in a lucid dream but he wasn’t and at that moment, was where it gripped me back in due to the character seeming to come out of his shell a little and stand up for himself a little more.

After this, I felt gripped again and then just like that the film ends with an almighty thud of an ending, like a cliffhanger, just as viewers were lured back into the film again. I now want to know whether things with Zel progressed further with Kat, as the ending was sudden, which now begs the question on whether the ending was a Lucid dream from inside Zel's head or if it was real.

This is a very trippy film, which explains why it is under the Genre “Thriller/ Sci-Fi” but despite my doubts within the film and losing focus at some points, it is good for all who enjoy Sci-Fi/Thrillers.

Camera shots improved slightly throughout the film, but I did notice that there were some issues with the steadiness of the filming, and some lighting issues, other than that it seems a good film and, as I do with all my reviews, I always recommend a watch as someone else’s view of this can be completely different to mine.

I do kind of feel like I have been faced with a brick wall after that ending, which I am never overly pleased about when films do this, is there going to be another film following on? Is there going to be an explanation for the ending of the film? Was it a Lucid Dream? So many questions….

Give this a watch, that is all I am going to say here.