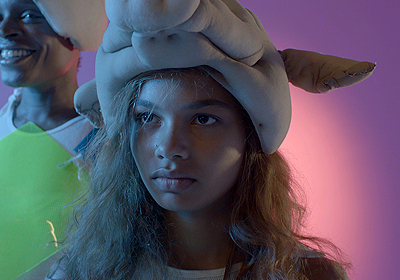 "Howard displays incredible potential as she acts out against her overprotective mother, played by Miranda July. In fact, her command at times is spot on"

Madeline, a biracial New York high school student, awaiting a response back from Juilliard, is encouraged by theatre director Evangeline to blur the lines between character development and identity, during which time she captures the character traits of a growling cat, and a deserted sea turtle; and that’s just in the opening sequences!

Even Evangeline (Molly Parker) is unsettled when Madeline comes on stage, porting a shell, and utters the words “whose hands are those?”

“Are they yours, or are they the turtle’s?” The most poignant part of Madeline’s acting is when her state is ‘detached,’ something which is taken advantage of by Evangeline and Madeline’s mother Regina, played by Miranda July, regardless of the effect it may have on Madeline. “…she doesn’t .. know how to deal with it, and other people (it would seem) are trying to take control of her life.,” suggests Howard.

The comparison between live theatre, and capturing a similar effect on film isn’t easy but in ‘Madeline’s Madeline’ it comes close, using a combination of visual poetry and thought through language, at the same time that it establishes a transcendent timelessness, betwixt the incidental and the immediate.

“Madeline’s Madeline” could be mistaken for thinking the audience cares as much about 'the creative process' as actors and directors do. “Thou Wast Mild and Lovely” Decker’s third feature (fourth, if you count the semi-autobiographical documentary “Flames,” she co-directed) is felt to be her most accomplished piece of work, despite the grating effect it has on audiences, as they’re pushed toward the headspace of an actress whose yet-to-be refined talent is prized open, like Pandora’s box.

At the base of the film, Howard's magnetism tells us 'a truth,' her truth but not necessarily the truth of everyone else. And we suspect it is different from that of her mother, and teacher.

Director of Photography, Ashley Connor, who shot prior films of Decker’s, as well as the Sundance winner, "The Miseducation of Cameron Post,' is skilled at making the uncomfortable seem lyrical, upon which lies a fight for poetical dominance, that is reflected in the light and the shade, as Madeline’s reveries about hurting her mother is reminiscent of horror, yet something ethereal can be found within it.

The film steadily fuses together an emotional and artistic catharsis, which includes a full-company dance number, that bursts out on to the street. But the tight script, with meta-fictional metaphors might be preferred like in “Adaptation,” a screenplay by Charlie Kaufman.

Howard displays incredible potential as she acts out against her overprotective mother, played by Miranda July. In fact, her command at times is spot on, obtaining the ability to stop crying midway, at the same time she retains a calm demeanour about her. Impressive.