Marry Me(2022) by Federica Roberti 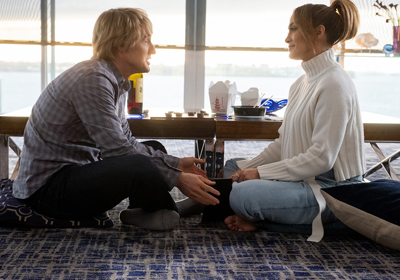 If it’s Valentine’s Day, and you are single and dreaming of a whirlwind romance to distract you from reality, Marry Me is the right film for you.

Based on the homonymous graphic novel by Bobby Crosby, Marry Me is what Notting Hill was for the 1990's, but with more social media and expensive glamour.

After deciding to get married in front of a huge arena to the notes of their hit song, pop star sensation Kat Valdez (Jennifer Lopez) is due for a rude awakening when she discovers that her fiancé Bastian cheated on her with her assistant right before their concert.

To avoid public humiliation, in a spur of the moment decision, she picks a new husband from the crowd and marries unknown boring math teacher Charlie (Owen Wilson), who is at the concert just to chaperone his friend and daughter.

What is supposed to be just a stunt to avoid becoming the punch line on all social platforms, turns into something more between Kat and Charlie. However, their lives could not be more different and their relationship is put to the test when Kat’s ex comes back into the picture.

Directed by Kat Coiro, Marry Me is an explosive rom-com like we haven’t seen in awhile. Starring Owen Wilson and Jennifer Lopez, this film can be easily considered the American delayed response to Notting Hill if the beloved British romantic comedy was set in 2022.

The plot sees a famous person falling in love with an ordinary guy; same as Hugh Grant and Julia Roberts, Wilson and Lopez make quite the unusual pairing, however, on screen, they work pretty well thanks to their sense of humour and natural chemistry.

The cast ensemble is also quite outstanding with an impressive roster made of NYC finest comedians. From Michelle Buteau to Sarah Silverman and Utkarsg Ambudkar, the audience is pretty much guaranteed a good time throughout the film.

Along with some pretty funny scenes and good comedy timing, Marry Me is highly entertaining thanks to the rhythmic soundtrack performed by both JLO and Maluma, making the story flow easily and quickly to a lovely happy ending.

Although the concept has been revisited many times already, Marry Me brings back to the screen the classic rom-com format filled with feel good moments and over the top romantic gestures. If looking for an easy night in, this is the perfect guilty pleasure or pick me up movie on a gloomy night.