Me Before You(2016) by Gloria Daniels-Moss 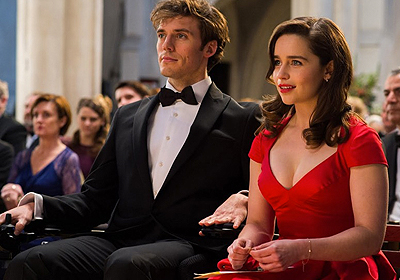 This could have gone terribly wrong. It could have been tossed to one side in the humungous heap of Hollywood romances that follow a liable formula, achieving nothing other than making teenage girls weep. Lucky for us, kick arse female director Thea Sharrock steers clear of such tropes, in book to screen adaptation of Jojo Moyes novel Me Before You.

The old don’t judge a book by its cover phrase springs to mind here. Virtually every poster has two well know actors staring longingly into each other’s eyes; when what they really should have done is given us a funny, awkward even moment that these two unlikely people share so often in this near 2 hours of bittersweet comedy drama. By the by, we are introduced to a home town girl, Lou played by no other than the mother of dragons, Emilia Clarke. After being let go from her current waitressing job she lands a job with the rather rich, castle owning Traynor’s, as a carer for their paraplegic son. For a moment things start looking up for Lou, until she realises the sad and painful truth of Will’s (Sam Calfin) condition.

It doesn’t take a rocket scientist to know where this relationship is heading, but it does take a great deal of Lou’s charisma and cuteness to break down Wills miserable bubble he has created for himself. Me Before You takes on a subject that has so much taboo surrounding it, that the majority of the population probably think people would never actually go through something like this. Even though Will is dashingly handsome and has now found salvation in Lou, he isn’t the man he wants to be, he isn’t the man he used to be and that’s the problem. It’s simply heartbreaking.

Lou’s colour clashing outfits, crazy footwear and quirky fashion style accentuates her full of heart spirit. She is so sickeningly sweet at times, that small doses would have worked just as well, albeit Clarke pulls this off with utter ease considering this is way down the other spectrum of her fiery silver haired Targaryen. Although, not even her bumble bee black and yellow striped tights and a smidgen of happiness in amongst his now gloomy life will sway Will from his stubborn mind. Her insufferable, fitness freak of a boyfriend Patrick, doesn’t seem to ever put her interests first, even if Matthew Lewis is possibly the most hilarious character on screen and utterly steals the limelight whilst vigorously counting calories and jogging on the spot. Laughs which this emotional charged flick benefitted from on so many levels. There is a moment when you realise that Finnick Odair, Clara Oswald, Neville Longbottom and the Mother of Dragons on screen makes the sci-fantasy nerd come alive in all of us.

Too many of us have an automatic defence mechanism when it comes to real life, emotional hardships. Yet, Me Before You can undoubtedly act as a much needed dose of a feel good, romantically charged tear jerker that gives us something much more than a standard clichéd rom com. This take on such a story should certainly satisfy hardcore fans and probably gain a few book sales after this hits the big screen this Friday.

Not without predictability, Me Before You will leave you floating on air and trying to fight back the tears, not to mention wanting to pull on a pair of yellow and black striped tights!