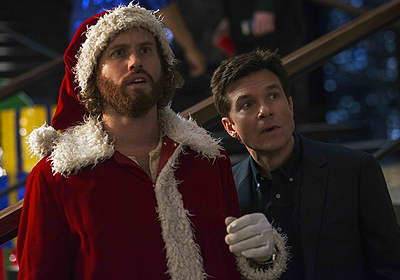 I dare you to cast your mind back to all those work parties – yes, those dreaded events. Dinners you have sat through, awkward conversations between people you really have nothing in common with and those embarrassing dance moves you so confidently pulled to a song you don’t even like are following you around like a cloud of black smoke every time you go to get a coffee and Barbara in HR seems to always bring it up. Of course, such disasters could have been narrowly avoided by faking a cold or blaming it on the lack of a dog sitter, although where is the fun in that?

From comedy director’s Josh Gordon and Will Speck we are invited to one hell of a Christmas work bash that certainly doesn’t disappoint. Nor does it wow us; providing a chortle inducing 90 odd minutes that’s for sure, but never offers us anything new to digest. At the heart of this story, is blood thick sibling rivalry that sparks Carol Vanstone (Jennifer Aniston) CEO of software firm ‘Zenotok’ to threaten her estranged brother Clay (T.J. Miller) with closing down his branch unless he seals a new deal with a wealthy client to solve their finances.

The catch is that he has to close the deal before the night is out. Unless they bag something rather pricey, there will be no bonus and he will have to start firing people after he has promised to keep them safe. Desperately trying to win people over, Clay along with his Chief Technical Officer Josh (Jason Bateman) and tech whizz Tracey (Olivia Mann) realise that the only way they will win this tough client over is by throwing the best Office party he has ever seen.

In amongst the overtly silly jokes and trivial exchanges between employees, the screenplay offers an abundance of cleverly witty remarks. Side comments and blatant digs at the world’s current political state are simply gold providing us with much needed respite from juvenile jokes. Bateman and Miller work well together creating the good cop, bad cop routine and Aniston appears to be having a ball of a time acting as the harsh, cutthroat sister and CEO.

Olivia Mann is insanely pretty here, whilst Kate McKinnon as the turtleneck wearing, parrot owning Mary from HR truly steals the show here. Additionally, the ensemble of supporting cast here simply entertain and come with an abundance of quotable lines that catch you off your guard and there is no stopping the nasally laughter emerging.

Above all else, this is a merry little film. Strip away the predictable and clichéd comedy, Office Christmas Party provides good old fashioned slapstick fun that brings a smile to one’s face throughout. No doubt this will entice the Hangover and Horrible Boss’s fans holding its own in such a genre. Just don’t expect anything other than silly festive debauchery, with a sprinkle of cocaine – or maybe quite a bit (oops).