Only The Brave(2017) by Federica Roberti 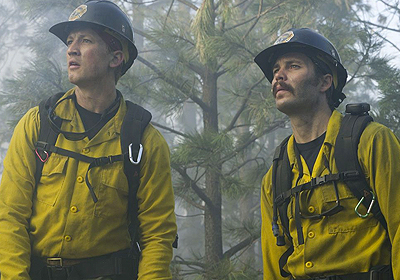 Inspired by the GQ article “No Exit” on the Yarnell Hill fire from 2013, Only the Brave celebrates the heroes of the Granite Mountain Hotshots who bravely lost their lives on duty.

Directed by Joseph Kosinski, Only the Brave follows the twenty firefighter crew members from their training to become certified firefighters, through the last tragic day in which 19 of them lost their lives in the fire. Since the beginning the rhythm of the film seems peaceful, however, having the knowledge of what is to come, makes the audience feel on edge for the entire film until the tragedy unravels. For this reason, the pace of the movie builds up and the action is mostly reserved for the last half an hour of the movie, since the story is structured to allow the audience to get to know the 19 brave firefighters before the disaster that killed them.

The film wants to celebrate these men's hard work, their families and their struggles that brought them to choose to become firefighters to protect their state. The cinematography is for the most part made of panoramic shoots of the mountains in Arizona during fire season, to showcase how dangerous they can be, or close ups on the protagonists to highlight their emotions and state of mind throughout the story.

The characters are all introduced during their everyday lives, the audience really gets to know every single one of these courageous men along with their significant others. The cast ensemble as a unit gives a heartfelt tribute to these heroes by giving justice to their lives and commitment to the job. Particularly brilliant is Jennifer Connelly, who plays Amanda Marsh, the wife of the chief of the Granite Mountain Hotshots, played by an extremely talented and focused Josh Brolin.

Connelly not only supports Brolin shoulder to shoulder without missing a step, she also conveys Amanda’s heart-shattering pain and strength throughout the film. Her character is fearless and loyal, but she is also extremely aware that at some point she could lose her husband. She is not afraid to stand her ground or show her weaknesses with her partner during their daily routine. Her ground breaking performance, however, is crystal clear at the end of the movie when she is actually faced with her biggest fear and all of a sudden she is alone for the first time.

Brolin, Teller, Kitsch and the rest of the actors playing the 20 members of the firefighters hotshots do a fantastic job in portraying the crew’s camaraderie and their courage until the very end. Their relationship feels natural and highlights how young all of the crew member really were.

What makes Only the Brave a successful celebration to the memories of this heroic crew is the fact that it doesn’t fictionalise the Yarnell Hill fire but it rather highlights how unexpectedly life can end. Even though the film can feel really long, the deliberate pace is necessary to remark how life can be unpredictable and a tragic event could happen in the blink of an eye.

As a biographical action movie, Only the Brave successfully celebrates and honours the memory of the Granite Mountain Hotshots who sacrificed themselves in the line of duty without romanticising this tragic event, it keeps this story honest and grounded.