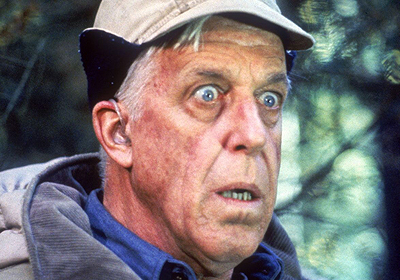 So just incase there's anyone reading this who isn't on board (or didn't see that South Park episode where they fake butters death) This is how Pet Sematary goes in a Nutshell. A city family move to a (not so) quiet area which includes one neighbour, fast trucks ploughing by and a path that leads to a creepy looking Pet Sematary where animals that are run down by the trucks are buried.

Their neighbour Jud Crandall (Fred Gwynne) shows Louis Creed (Dale Midkiff) what lies beyond The Pet Sematary... a Native American Burial Ground which has the ability to resurrect any animals that are buried there... or people... Like for example when Louis' Daughters cat Church is run down by a truck... and then Louis' own son Gage too in similar fashion. Despite The multiple warnings from Jud, Louis (who is obviously overcome with grief beliefs that bringing his son back from the dead will make things better... But as its famously quoted in this film 'Sometimes Dead is Better' and what rises from that Burial ground isn't the Gage that he knows and loves.

I was (at first) condemning this movie a little for the choices that Louis Creed was making and how he wasn't listening to reason but then I gave it some thought and came to the realisation that this story is a commentary on grief and the tragic circumstances of losing someone we love and how we choose to deal with grief. Let's be honest... No parent should ever have to bury their child and if you have lost a child (or a loved one for that matter) wouldn't you even for a second consider going up there to try and bring them back.

Some do see the humour in the movie with the (not so) Friendly Ghost Victor Pascow (Played Brilliantly by Brad Greenquist) also trying to warn The Creeds of the bad decisions that they make throughout this movie.

Many others see the horror within not only the main plot but the Zelda flashbacks too. I see this movie as a drama about grief, loss and desperation. Plus the score by Elliot Goldenthal adds to this dark atmosphere throughout. A classic Stephen King story.