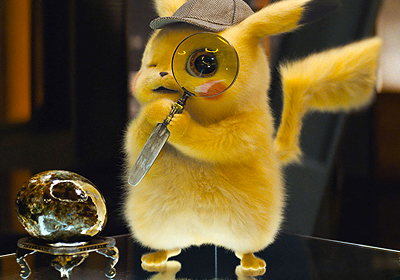 "doesn’t rely on you knowing the lore, sure it helps, but it isn’t reliant on it"

First of all, let me start by saying that I am not a Pokémon fan, I have an appreciation for it, but it’s emergence in the 90’s passed me by, and while I was familiar with it; due to my brother and younger friends being into it, I was and still am not any sort of aficionado when it comes to the cute Pocket Monsters, that being said, this film doesn’t rely on you knowing the lore, sure it helps, but it isn’t reliant on it.

Adapting video games to film has always been tricky, so I went into this with an open mind, I didn’t feel that not knowing all the lore would handcuff me in a way where I wouldn’t enjoy the film and leave me confused throughout, I just went in and enjoyed the ride.

So the film opens as Mewtwo, a genetically engineered Pokémon breaks out of containment and pursues a car that is run off the road, We learn that this car carried the titular Pikachu (Ryan Reynolds) and his human partner Harry Goodman.

The action soon takes us to a nearby city where we meet Tim (Justice Smith) as he and a friend attempt to catch a Cubone, the Pokémon excursion is cut short when Tim receives word that his father has died in the car crash and he boards a train to Ryme City where his father was on the Police Force.

Tim befriends a young reporter Lucy Stevens (Kathryn Newton) and the pair along with Pikachu and Psyduck go on an adventure to uncover the mysteries of the case, encountering Pokémon, most notably a hilarious exchange with a Mr. Mime, a hazardous confrontation with a Charizard, an encounter with feral Aipom and Jigglypuff, doing what Jigglypuff does! What is that sentence?!

Right off the bat Pokémon Detective Pikachu is beautiful, the world feels lived in and seeing Pokémon and humans co-exist is a sight to behold, especially when these creatures are photo real with an attention to detail that is second to none. Franchise fans will undoubtedly get more out of it than non fans but the film doesn’t beat you over the head with references and in-jokes that only the initiated will get.

Throughout the film, we are treated to flash backs and recreations of past events that help to shape the actions of the film, I do not want to go into them too much as I don’t want to spoil it, all I will say is that these flash bacs help to build out the narrative in interesting ways.

The best part of the film is definitely Ryan Reynolds as the titular Detective Pikachu, he is believable as the Pokémon and whist he is best known for his role as Deadpool, I never once though that he didn’t work in the role of the electrified rodent. His chemistry with Justice Smith is on point and is the driving force of the film.

Similarly, Smith’s chemistry with Kathryn Newton is great, fun to watch and believable, I can see a bright future in film for these two and the supporting cast of veteran Actors Ken Watanabe as Lieutenant Hide Yoshida and Bill Nighy as Howard Clifford is exceptional and really adds gravitas the film.

As mentioned above, I am not a Pokémon aficionado, and when coming out of the screening, I said to a fellow reviewer that the curse of video game adaptations may be over, and I stand by that; having seen the film twice at the time of writing this review, I think the future is promising for video game based films. Yes, I know this had manga and cartoons as well, but it is mostly known as a game, I mean most people have dabbled in Pokémon Go at some point, I know I have.