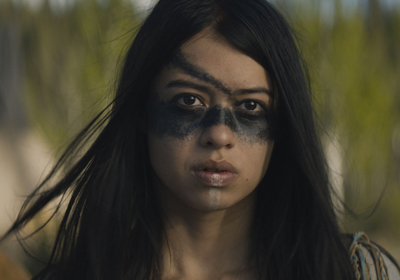 "The fight scenes are also great, superbly choreographed throughout"

Prey is… an unusual beast, being a prequel to 1987’s classic Predator it has a lot to live up to especially when you consider the sequels and spin offs which have come before it and have been met with various degrees of success and fanfare.

Let's start with the obvious, 35 years removed from the originals release date means that there is always going to be a fair amount of change from what has gone before, but with Top Gun: Maverick releasing in the same year and to glorious success there is hope that the magic could be rekindled.

What we have here however is.. an anomaly.

Releasing on Disney+ on 5th August 2022 and with a cast of relative unknowns there was always going to be an uphill battle when it comes to winning around hard nosed Predator fans. The story itself is solid, it brings the titular Predator into the early 1700’s and having him/it take on Native Comanche hunters. It's a mostly fresh idea which fits in with the modus operandi of previous entries… Hunter vs Hunter and is usually a recipe for good cinema and story telling.

In my opinion however it was a misstep to then have the film also serve as a coming of age story for our main character Naru played by Native American actress Amber Midthunder and credit where credit is due, the director Dan Trachtenberg did have authenticity in mind, by casting Native American players for the majority of the cast which unfortunately doesn’t really gel with the Predator branding.

It felt not so much tacked on as out of place in a lot of the film, I would say however it’s a strong indicator that this feels more marketed towards the Teen & Young Adult markets more so than the usual Predator fan base.

Another notable thing is the CGI, for the most part the CGI is impressive, The Predator itself looks every bit as intimidating as previous entries have show him/them to be, although this is a much more bare bones version fitting in with it being both a prequel as well as a more tribal interpretation. There are one or two small bits that stick out like a sore thumb, no spoilers but both the bear and lion we see at various parts don’t seem as believable as they should do given everything else we see.

We’ve talked about its problems but I’m not fully slating the film, the cinematography is as beautiful as ever and expertly shot. The fight scenes are also great, superbly choreographed throughout. Lastly the sound throughout was used to perfection, perhaps more noticeable in a cinema setting but there was a satisfying weight to the sound throughout.

It’s worth noting that if you are a hardcore fan of the Predator series you’ll likely either love or hate this entry, there is enough to make it very watchable but not to eclipse the original. Prepare to groan at the use (over use maybe) of the classic one liner 'if it bleeds we can kill it.'

To summarise, Prey is a decent all around movie, it’s watchable and not overlong. It’s going to benefit from being on Disney+ in my opinion as it will have a far further reach than a wide cinema release. It ranks about mid way in the series, and probably the most impressive since the original too.

I’ll give this a solid 3/5, it’s worth it, as long as you’re not a superfan. With some parental guidance this could be a fun film to watch with the family and would appeal to you if you like coming of age stories and dare I say… Girl Power.