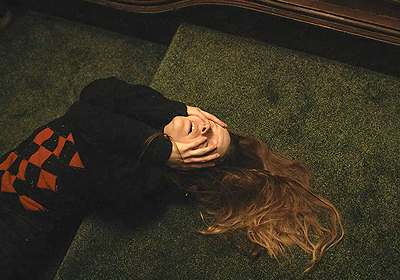 "an unforgettable performance by Clark"

Horror should be praised more. It is one of those genres that never gets old, constantly reinventing itself with new innovative voices. Every year there seems to be a new master who comes into the fray, spinning creative yarns to fright and send shivers down our spine.

Indeed, horror should be praised more. Thankfully, we have a saviour to help us – Saint Maud.

Directed by Rose Glass, Saint Maud revolves around the eponymous character. A waif-like little thing, Maud is a devout Christian and carer nurse, who believes it is her godly duty to care for the sick. She is sent to the overbearing manor of Amanda, an acclaimed artist and dancer who is suffering from terminal cancer. However, Amanda is cruel and bitter and comes at odds with Maud’s quiet and kindly nature. Treating Amanda, will put all of Maud’s patience and faith to the test as she slowly beginnings to break.

Glass’ work here is brilliant and effective. It creeps on the back of the neck as Maud unravels throughout the film. Utilising dreary tones for Maud against the neon backdrop of a seaside town, Glass allows the creepiness to seep in. As Maud dances between the line raving lunacy and religious iconography, the film builds the tension, Glass clearly knows that the most horrific element here is Maud herself and every conversation someone has with her.

Morfydd Clark is a revelation, contorting herself physically and mentally to inhibit someone drifting further and further away from her own mind and life. Maud is an anti-hero for the ages: Someone so convinced in her faith and her reason that it drives her slowly insane. Clark is incredibly controlled and astute in her performance, using this meek little voice similar to Sissy Spacek in Carrie to convey a lot of grief, rage, and absolution within this character. It is an unforgettable performance by Clark.

Jennifer Erhle provides great foil for Maud as someone who not only doesn’t believe in religion but openly scoffs at it (and Maud.) Almost vile, Erhle’s Amanda is crucial to Maud’s unravelling especially when Maud thinks it is her duty to save to woman from all her misdeeds. It creates great, toe-curling tension that is beyond the horror elements.

With a last shot seered into your mind, long after viewing, Saint Maud is a creepy and brilliant debut that is a definite must-see.