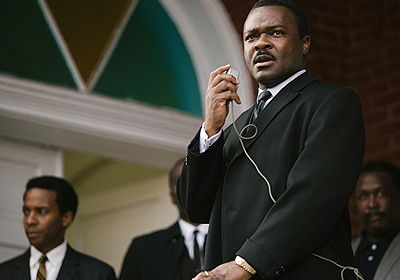 "A film of true suffrage that will keep your eyes glued to the screen and wet with tears, this is simply brilliant filmmaking"

A hard-hitting and thought-provoking film about the struggle for equal rights, the Oscar tipped Selma is a stunning re-telling of the historical protests that took place in 1965 Alabama.

The Civil Rights Act of 1964 has been passed, legally desegregating the Southern States of America and granting African-American citizens the right to vote. However, the levels of discrimination are still extremely high in some areas and it’s made very difficult, if not impossible, to actually register to vote. In ’65, Dr. Martin Luther King Jr. (David Oyelowo) and his followers chose the city of Selma, where racism was rampant, as their civil rights battleground.

Despite violent opposition, Dr. King’s protest remained dignified and peaceful, on their part at least, which offers an insight into the shocking inequality and prejudice that was at play not even 60 years ago.

This is a film everyone needs to see.

Selma’s a clear picture of how far we’ve come, but also of how far we still have to go in eradicating racism and discrimination. Expect intense, brutal and disturbing scenes of racial abuse against a non-violent voice. The historical accuracy of the events is a powerful educational tool that will make you shameful that fellow humans can behave in such a way, especially so near in time to present day.

However, it also ignites hope and faith within the huge numbers of people who will stand against it in the fight for equality. Selma is an absolute masterpiece that goes just far enough and also pulls back the curtain on what happened. Not only does it depict these true events, but it also gives a strong insight into the personal life of Dr. King.

Director Ava DuVernay should be applauded for crafting such an iconic film that’ll stand its ground in historical cinema. David Oyelowo gives an utterly breathtaking performance as King Jr. as he captures the essence of this great man. Carmen Ejogo as his wife, Coretta, beautifully illustrates the personal effects of King’s campaigning, while Tim Roth portrays racist Governor George Wallace so well you’re utterly disgusted by him all of the time.

A film of true suffrage that will keep your eyes glued to the screen and wet with tears, this is simply brilliant filmmaking.