She Said(2022) by Federica Roberti 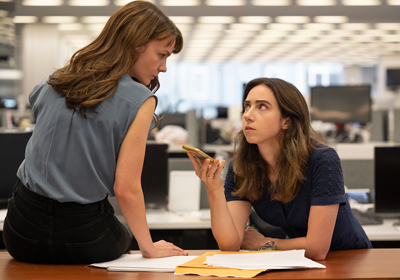 Recently it feels like the #metoo movement has always been here. The public opinion either thinks its gone too far and lost its purpose or it started too late, when decades of damage already silenced women all over the world.

She Said reminds us where it all begun and how far we have slowly gone to try and dismantle the system that protects predators and gives once again a face and a voice to all those women who lost so much during this fight.

Written by Rebecca Lenkiewicz and based on the book from journalists Jodi Kantor (Zoe Kazan) and Megan Twohey (Carey Mulligan), She Said follows the meticulous research the two acclaimed The New York Times investigative journalists carried out for their 2017 reports that kick-started the #metoo movement and uncovered decades of abuse and sexual misconduct carried out by Harvey Weinstein and covered by Miramax.

Maria Schrader work as a director for this movie is to follow Kantor and Twohey through their investigation to build their article and fighting to protect their sources, but at the same time create a safe environment where their sources feel safe to come forward and corroborate their findings.

Although a movie always needs to bring to the screen a dramatisation of the events, Schrader is able to build a strong newsroom procedural without making it trivial or dry. The audience is captivated by the events. The pace of the movie is fast but doesn’t leave anything behind.

By focusing on the investigating process carried out by Twohey and Kantor, portrayed by maintaining their clinical characteristics, since this is not a story that needs to be diluted into a drama, She Said highlights the timeline that lead to the article published in October 2017.

For this reason the film becomes almost a manifesto to the hard work these women went through to serve all the victims affected by Weinstein’s abusive behaviour and by his organisation covering everything up with settlements.

Since the story follows Twohey and Kantor through their process, the film in a way humanises these brilliant journalists. Carey Mulligan and Zoe Kazan worked together effortlessly. Their performance highlights Kantor and Twohey’s dignity, hard work and commitment throughout their investigation. The trust they had to build with their sources and the professionalism they kept when having to face Weinstein and his team is clearly showcased by the two actresses along with their internal turmoil while listening or making all the victims remember and relive their traumatic experience.

What makes this movie particularly moving is the way all the women who went through being abused and being silenced by Miramax are given a face once again, instead of remaining just a list of names on a piece of paper.
The film becomes another chance for the victims to have a cathartic moment and a reminder that now, they don’t have to carry the weight on their own anymore.

Over the years the #metoo movement has evolved and changed, sometimes for the better and other times for the worse. She Said is a brilliant movie that reminds us where everything started and how far society and institutions have gone to start protecting victims of abuse in the workplace. While highlighting that there is still so much work that needs to be done.