Soundtrack To Sixteen(2019) | The Fan Carpet 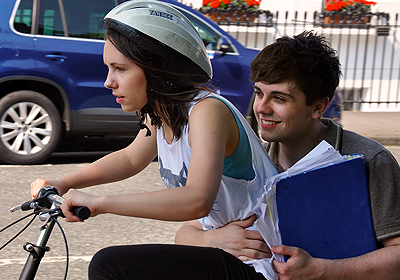 "a triumph across the board, the young leads have a bright future ahead of them, as do the Shakespeare Sisters"

The Directorial and writing debut from the Shakespeare Sisters, Soundtrack To Sixteen is a sweet coming-of-age story that centres on the self conscious Maisy (Scarlett Marshall) and the happy but geeky Ben (James Calloway), set in London in the 90s, during the all important exam season.

Maisy is unhappy with her lack of experience in romance, whilst being obsessed with a boy, she is unfairly the butt of jeering and teasing as she tries to cope with the harsh times during school, on the other hand, Ben believes he is better than everyone else, but when his grades start to plummet, he has a mini breakdown and spirals out of control.

Their first chance encounter is at a party but fortuitously, the pair meet on a night bus after a particularly harsh event for Maisy and the pair strike up a friendship, and begin to get close, and they seem happier for it, coming out of their respective shells.

The thing to note about Soundtrack To Sixteen is that it knows exactly what it is and the story it is trying to tell, never once trying to be something it isn't. Very well shoot and edited, the film is well made and is a very well acted piece that sits nicely and comfortably with coming-of-age dramedys of similar ilk.

Soundtrack To Sixteen is a triumph across the board, the young leads have a bright future ahead of them, as do the Shakespeare Sisters who work so well together, crafting a narrative that is engaging from start to finish.