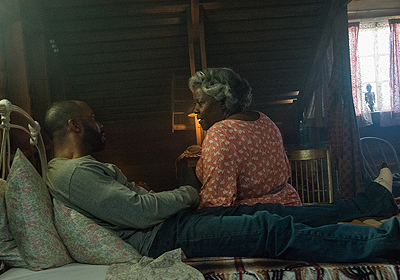 "this intense thriller that keeps you hooked from start to finish"

I Just finished watching Spell and during the very well-crafted closing credits sequence I couldn't stop saying 'Damn that was a good movie'.

Omari Hardwick stars as Marquis Woods , a man who has had a troublesome childhood that he had tried to run from his whole life by being successful in life and raising a well-off family. Sadly, however his past comes back to haunt him as he has to attend his father funeral.

On his way there the charter plane he is on is struck by lightning and it crashes with his family in the plane also. When he wakes up, he is in a bed in some random farmhouse in the middle of nowhere with a seriously injured foot injury.

He seems to have been rescued and nursed back to health by Elosie (Loretta Devine) and her husband Earl (John Beasley). But all is not as it seems as this farming community believe strongly in the use of voodoo magic and before he realises it, Marquis is being held as a prisoner and prepared for a dark ritual. Marquis must find a way to survive and escape from the farm whilst searching for his missing family.

So basically.... in my very creative and sometimes disturbed mind... I may have just watched Resident Evil 7: The Movie. This is 'Misery' if Anne Wilkes was using voodoo on Paul Sheldon.

The intentionally slow opening builds up to a lot of creepy, unsettling and not for the faint of heart moments which leads to a more than satisfying third act with just enough action too.

I would like to see Omari Hardwick as a future action hero someday as he certainly has some of those moments in this movie plus, I have to give veteran actress Loretta Davis all the love in the world for her AMAZING performance as 'Eloise', Ben Onono was on point with a suspenseful score that added to the creepy tension throughout. Director Mark Tonderai and Writer Kurt Wimmer have done a great job with this intense thriller that keeps you hooked from start to finish.