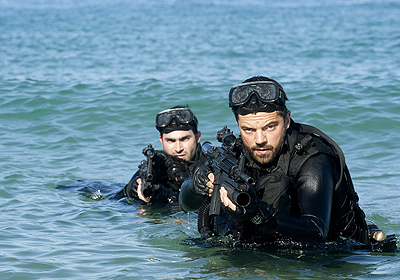 Duncan Falconer, a former SBS operative himself, used his experiences in this elite unit as the basis for his character John Stratton, the highly skilled and heroic protagonist of a long running series of novels. Now Falconer’s character has finally made the leap from the printed page to the big screen in the form of Stratton, a action adventure film that is, unfortunately, lacking in both action and adventure.

Decorated SBS operative John Stratton is called upon by his superiors to track down an elusive terrorist cell led by a rogue Russian spy with nefarious plans to unleash a deadly pathogen upon the innocent population of a major city, possibly killing thousands.

Those expecting Stratton to reinvent the wheel with regards to cinematic action and carnage should look elsewhere, as should those hoping for at the very least an entertaining film, because this is quite possibly one of the most generic, cliched and dull action films that I’ve seen in quite some time.

With what is such a dull and uneventful film it is, it has been gifted a surprisingly decent cast, albeit one that it wastes with stock characters, terrible writing and frankly dull uninteresting performances. Quite frankly, these actors deserve better than this.

Dominic Cooper is somewhat miscast in the title role of John Stratton. Cooper is a fine actor who has done fine work in the past and continues to do so, and while he does seem to be trying with the character, he just doesn’t possess the necessary physical presence or charisma needed to create an effective or memorable action hero.

The normally good Gemma Chan gives a forgettable turn as Stratton’s colleague Aggy, with her almost being as robotic as her excellent turn as an actual robot in TV drama Humans, Tom Felton looks like he wishes he was still in Harry Potter, while Connie Nielsen, as Stratton’s MI6 superior Sumner, adopts a questionable English accent that makes her sound more like an English nanny than the head of an intelligence agency. The most perplexing of all is the appearance of screen and stage legend Sir Derek Jacobi as Stratton’s elderly neighbour, with the veteran actor likely being convinced to take the role at the request of his accountant.

If you saw it in a better action film starring Schwarzenegger or Stallone about 20-30 years ago, then you’ll see it here in Stratton, with it being a veritable checklist of action film cliches.

An opening action scene that results in the death of the heroes friend, check. A hero who gets results but has to listen to repeated complaints from his superiors regarding his methods, check. One of the heroes supposed allies being revealed as a treacherous bastard all along, check. Stereotypical Russian villain with a name that sounds like he should own an English football club who wishes to destroy things, checked and signed.

I could forgive the cliches and the rather uninteresting performances if the action was at least good and with the film chock full of car chases, gun battles and vicious hand to hand combat, you would think it would at least make for a bit of dumb fun, especially with Simon West in the director's chair, with the cheesy fun of Con-Air and The Expendables 2 being fine examples of his talents in directing action.

Unfortunately, like everything else in the film, the action scenes are dull meandering, badly edited messes, including an opening gun fight the resembles a glorified Call of Duty fan film followed by a car chase that seems to have been lifted from an episode of Top Gear and climactic boat chase moves at such a slow pace that it feels more like a leisurely tour of the Thames than a thrilling chase. In short, these are actions scenes that don’t so much as leave you on the edge of your seat, but rather sitting back comfortably while snoring loudly.

Stratton is a film that should have turned out as a rather daft but otherwise fun action flick, the kind that would be perfect for those lazy Sunday afternoons. Instead, what we get is a boring slog of a film with stock characters played by a talented cast who might want to fire their agents, a plot so derivative that a five-year-old could spot the clichés and some of the flattest and dullest action you’re likely to see all year. I suppose I should end this review with at least one positive thing to say about the film and it’s this; at least it was short.