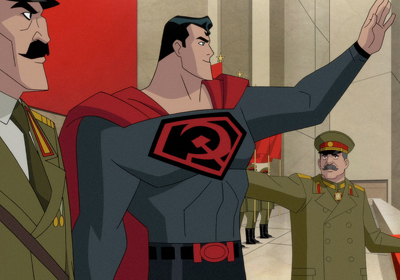 "fun and enjoyable but not for young children more for teenagers, it deals with many adult themes and the violence is strong"

Superman: Red Son is the 37th entry into the DC Universe Animated Original Movies series, the film is based on thefamed Elseworlds comic book miniseries of the same name written by Mark Millar in 2003.

The film is set in alternative universe when Superman is raised in Soviet Union in the 1940's. At the start of the film you see a boy fleeing a group of bullies and hiding from them, this is the younger Superman. A young girl, Svetlana, defends him by chasing them away. He reveals to her that he was not scared for his own safety but that of the bullies before demonstrating superhuman strength and the ability to fly. Svetlana tells the boy he can use his powers to help the country.

In the following years you see him becoming the "The Soviet Superman" under the guidance of Joseph Stalin, he later discovers a secret gulag in Russia and sees his childhood friend, Sevtlana, who after years of being there is dying but was holding on know her friend would save her. Superman is enraged by this discovery and finds out the truth from Stalin and the kills him and takes over the the Soviet Union and leads a communist reign over Asian and Europe.

America creates their own Superman by cloning him with the help of Lex Luthor who is married to Lois Lane. This "Superior Man" is a failed as it is defeated by Superman in a fight. Years later Lex Luthor becomes President and creates the Green Lantern Corp.

This film is a very interesting concept; you have Batman as a terrorist in Russia against Superman and his reign, he is violent and someone who kills civilians for his cause. Also Wonder Woman, still a princess and ambassador from Themyscira, joins the alliance with the Soviet Union.

The acting in this is wonderful and Jason Isaacs creates a new Superman that is very different to the one we have met before. One of the standout is Diedrich Bader as Lex Luthor who is is not a villian but a more complex character, who uses his sciencist skills to help his country and create "Superior Man" and help forge The Green Lantern Corp. His presidency is pretty good. He is practical man and not Machiavellian as he is usaually protrayed.

The animantion moves with the times periods correctly and, any keen Superman fan, would recognise the Fleischer Superman cartoons style in the early part of the film.

This is fun and enjoyable but not for young children more for teenagers, it deals with many adult themes and the violence is strong. This follows a long line of very high quality DC animated feature films all based on many comic book storylines and graphic novels.