The Assent(2020) by Jonathan Hughes (The Killer Spotlight) 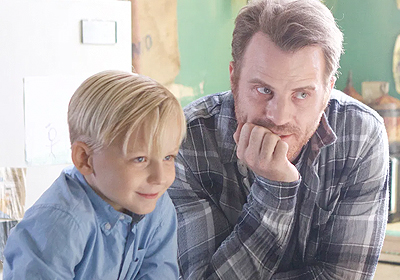 Joel (Robert Kazinsky) is a father struggling with his mental issues, whilst he's also trying to keep custody of his son after the tragic loss of his wife. But it seems that Joel can't catch a break when his son Mason (Caden Dragomer) starts acting strangely and becomes possessed by a demon.

Joel seeks the assistance of Father Lambert (Peter Jason) to perform an exorcism, he has been released from prison for allegedly killing a young boy that he was trying to exorcise. But with the aide of his assistant Brother Michael (Douglas Spain) and a scientist Rhonda (Eileen Dietz), they team up in an attempt to free Mason from the clutches of evil whilst Joel and his therapist Dr. Maya (Florence Faivre) look on helplessly.

I really enjoyed this one; to some of the critics out there they may look at this a knock-off to The Exorcist but truth be told I actually enjoyed the twists and especially Robert Kazinsky's performance as a father doing what it takes to save his son and not just when it comes to fighting demons either. Also, I liked how he kinda had his own personal demons to fight throughout the movie.

Pearry Reginald Teo has done a great job writing and directing this very interesting look at demonic possession and how it affects those around them. Very impressed with the twists and the end credits were done well too. The creatures and lighting effects also stood out to amplify the tension.