The Dissident(2021) by Gloria Daniels-Moss 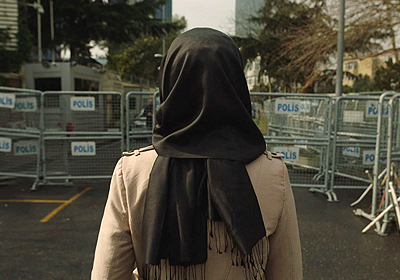 "Say your word and walk away. If only Jamal had that luxury"

#What_do_you_know_about_the_bees? We all think of Twitter as a keep up to date with news, share GIFS, fun outlet, don’t we? The luxury of being able to post, share your thoughts, opinions, emotions and watch them drift into the ether with perhaps the worry that you won’t get the same amount of ‘hearts’ as an adorable kitten – but not to fear for your life and flee the country. Bryan Fogel’s latest explorative piece of groundbreaking documentary filmmaking exposes The Kingdom’s undeniable control it has and the disastrous consequences for anyone who speaks up will ultimately endure.

After the jaw dropping exposure of Russia’s mass doping scheme in ‘Icarus’, it’s no surprise Netflix snapped it up pretty quickly after a successful festival run back in 2017. Albeit, the platform has closed its doors on this one, quite frankly speaking volumes and completely backs up exactly what Fogel brings to light. The absolute power and control that Saudi has is both shocking and deeply unsettling.

The Dissident is an extensive deep dive into how the political (or royal should we say) system rules The Kingdom and the orchestrated murder of Washington Post journalist, activist and eventual dissident of Jamal Khashoggi. The reason – the man stood up for the people and questioned the regime.

Unlike Icarus, Fogel takes the backseat as we only hear him briefly off screen, allowing this barbaric truth mainly to be told by Omar Abdulaziz, a budding Saudi dissident and friend of Jamal. We are planted in Montreal, Canada just 3 months after Jamal’s murder and the blatant risk just by speaking about this is painfully obvious here for all involved. As Omar carefully takes us down some very dark roads, the utter detail is a testament to Fogel’s determination to get this message heard.

Empathy, anger and an overwhelming sense of joy that Omar has survived this despite enduring threats not just to himself but to his family – some of which were tortured and killed just so the forces at play well and truly get their message across to not mess with them. Having to move constantly and changing phones more times that you can count, Omar has a vision and followers who are listening despite the worker bee army forged to deliberately abolish certain trending hashtags if they were a direct attack on the regime.

Later, we are introduced to Hatice Cengiz, a Turkish national and Jamal’s fiancé who stood waiting outside the embassy where her husband to be never came out of. The horrifying transcript uncovered from the Turkish Embassy exposing Saudi’s action plan to get rid of Jamal is so detailed, the fact that anyone involved in this murder was acquitted is unacceptable. It would be impossible to uncover and fully develop everything in the space of 2 hours. This moves at the speed of light; flashes of information, time codes, dates and graphics of millions of tweets sweep across the screen constantly. Thankfully, this this completely warranted, there is so much to absorb here and take in, process just as we did when Icarus graced our screens.

Nothing speaks louder than the truth. When that truth is abused by power, meditated and controlled by a social media army it does make you think are the Bees behind all these 1 star reviews? The urge to immediately consult Google and find every piece of this puzzle is overwhelming. This documentary is so profound and so weighty that at times it’s almost too much to bare. As we see Hatice address the United Nations in the hope to find answers is an emotive device placed here to tug on those heartstrings, but it's here for a reason. Such themes have been avoided and covered up for hundreds of years. Now more than ever we need to digest this unsettling tale in the hope such regimes shan’t get away with it again.