The First Purge(2018) by Gloria Daniels-Moss 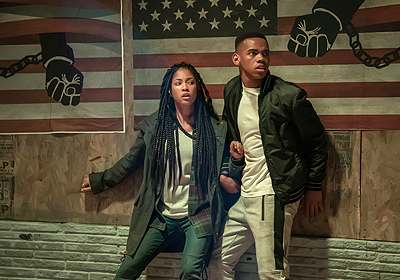 "Let’s kill everyone to fix the American Dream!"

I know what you’re thinking. The familiar feeling of an eye rolling prequel, this has all been done before, absolute trash completely springs to mind. And, yet, you are not wrong. This is comedy gold, sheer genius with a punch, that is indefinitely trash and there’s nothing wrong with a bit of that.

Casting one's mind back to The Purge (2013), this dystopian notion still hangs heavy in the air. An Independence Day like no other for the citizens of American (and certainly without Will Smith fighting off the aliens) where the nation is allowed an annual 12 hour stint where virtually any crime is legal and can be committed with no consequence. In the hope this will, establish a safe haven for the rest of the year and an excuse for officials to gut the streets of anyone deemed unworthy (oops – spoilers!).

The innovative idea this is grounded on still holds its own, although one can’t shake the incredibly blatant point they were so clearly bringing home (nope, not the football). The NFFA, the guys running this so called ‘experiment’ wanted it to succeed in any way they could. Offering people money, 5 grand to be precise in order to participate; let their frustration and rage loose on what is known as The Purge. Otherwise known as one of the scariest things on the planet - everyone able to do what the hell they want, kill, rape, pillage and completely escape the consequences. And of course, the level of participation when offering such dollar to people who are struggling was huge.

The siren sounds and we know what’s coming. We knew writer DeMonaco would be presenting a savage exploration of a nation in turmoil (in more ways than one) highlighting the wealth of blatant issues the world embodies today.

Although, we didn’t quite expect it to be so obnoxious; dripping in economic and racial undertones that are out right laughable. From the Nazi officer dressed in fetish gear, to the many news reports stating the violence is coming from the ‘poorer’ areas, to the gung-ho Klu Klux Klan on the back of a truck - it’s terribly hard to miss the point here. This really is a load of toss, but offers something deeply political and out-right terrifying to viewers throughout this cathartic slasher flick.

The progression of this franchise is rather interesting, a twisted series of ideas, from a home invasion of a rich homeowner, to its story of origin presented here reveals to society the horrifying truth that perhaps there is more tugging on the puppet strings from the higher echelons today than ever before. We are going backwards - it’s down to us, to stand up for what we believe in and start to gain that respect that virtually everyone ever has had to fight for throughout history at one stage.

Just in case anyone didn’t see, yep, that’s the American flag at half-mast in the final frame. Oh and just in case you missed the iconic “grab them by the p****y” reference, that alone establishes the confidence and coolness gives this film sheer unexpected enjoyment that is to be had; even though it’s at the expense of a deep routed problem that seriously needs to be solved.

The First Purge, or more aptly put - cleansing the streets of anyone American doesn’t want - The American Dream is officially dead.