The Ground Beneath My Feet(2020) by Phil Slatter 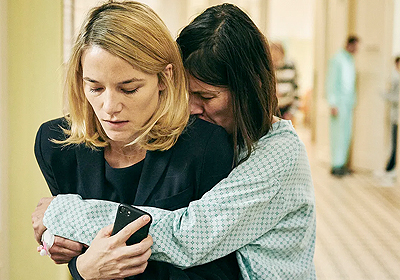 "an uncomfortable examination of elements of the world today, and a reminder in these time of the need for human contact and mental well-being"

In a world in which corporate exhaustion and mental health are prominent talking points, Marie Kreutzer’s The Ground Beneath My Feet is a timely examination of an isolated individual keeping her physical and career life on course whilst her neurotic state takes a battering.

Valerie Pachner stars as Lola, an Austrian business consultant working in Germany on a vital project, trying to save corporate jobs. Her life is an isolated and lonely one– she has no social life and is often seen running through empty streets, exercising at un-Godly hours and living in a hotel room. Her only family is her older sister Conny who resides in a psychiatric hospital having recently attempted suicide.

Lola is just about managing to cope with the stresses and strains of the two prime narratives in her life but what starts out as something approaching a melodrama develops into an exposé of Lola’s mental state. When she starts receiving mysterious phone calls it feels as though Kreutzer is leading us into horror film territory, but she quickly pulls this back and keeps the primary focus on Lola’s own psychosis.

Elements of the plot do become marginally overstretched, but it’s a strangely emotional and engaging film at its heart, despite a deliberately cold exterior and a story set largely in a business world where people are, by and large, simply numbers on a screen.

Aided by Pachner’s superb performance – she is barely off screen and Lola’s physical and mental exhaustion is etched into her face – The Ground Beneath My Feet is an uncomfortable examination of elements of the world today, and a reminder in these time of the need for human contact and mental well-being.