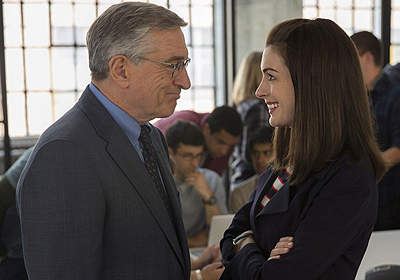 "A sweet, funny, charming film with two good performances by two of Hollywoods best but falls back into cliché"

Under anyone else The Intern would have been a rom – com about a handsome businessman and a young college girl who fall madly in love with one another and even though I love a rom – com this premise has been done. So it’s refreshing to see Nancy Meyers direct a film about another strong relationship - friendship.

Ben Whittaker (Robert De Niro) is a 70-year-old widower who has discovered retirement isn’t all it’s cracked up to be. Seizing an opportunity to get back in the game, he becomes a senior intern at an online fashion site, founded and run by Jules Ostin (Anne Hathaway).

The premise of this film is good with the whole senior working under a young, go – getting businesswoman the thing is they hit that nail to death with constant old man jokes which to Meyers’ credit were funny.

The whole film centres around De Niro and Hathaway, who have good on screen chemistry and seeing both characters interact was charming. However, with the film being so focused on these two Hollywood heavyweights the supporting cast are completely forgettable even Rene Russo, who was outstanding in Nightcrawler.

It did have plenty of laughs mainly involving De Niro and the hipsters, but it also wanted to pull on your emotional heartstrings so it sometimes became hard to judge the tone and at times it became sweet and it might be too sweet for some people.

Even though it wanted to be something different out of the box, and it does try, it just falls back into clichés about a woman fighting between her career and motherhood. While you have the wise old man showing old – school is cool and there’s even a reference to that Ben saying he’s the uncle of the company.

Verdict - A sweet, funny, charming film with two good performances by two of Hollywoods best but falls back into cliché.