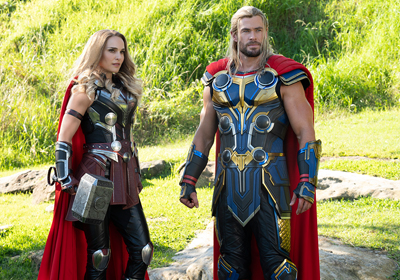 "A fun and hilarious sequel, filled with inside jokes and delightful moments for the fans"

Taika Waititi, who has directed the franchise since 2017’s Thor: Ragnarok, once again stays true to his directorial voice, with plenty of goofy humour and child-like imagination. The opening of the film here serves as a way to tidy up the loose ends of any previous films Thor (Chris Hemsworth) has been a part of, and it just about gets away with explaining Thor's life since we last saw him in Avengers: Endgame, with a light hearted narration from Thor's buddy and Kronan warrior, Korg (voiced once again by Waititi).

The conflict section of the story comes in the shape of terrifying and revenge obsessed super-villain Gorr, brilliantly played by Christian Bale. It is refreshing to see the villain story told so simply - a father who loses his daughter and seeks revenge on the very Gods who downplayed his faith and didn't respond to their prayers for survival. As an audience member there is an understanding of a more complex villain, who in the end (no spoilers here) is redeemable and despite all of his rage, does still have an ounce of heart in him.

The comic book fans will not be surprised by Dr. Jane Foster's character development in this film, superbly played by Natalie Portman. Though it is thrilling to find out how she comes to wield Thor's ex-weapon, Mjolnir and see her kick ass through this fabulous MCU storyline, there is a lot of heavy lifting that Portman does with Jane, and no spoilers, but a two hour film charting that journey would be thrilling! Chris Hemsworth once again shines as Thor, he knows his character at this point, and seeing him on screen just proves how comfortable he is with the heavy scenes and the more serious. As with the last outing, Waititi expertly pairs the electrifying action packed scenes with heavy metal classics such as Guns N' Roses's beloved anthem Welcome To The Jungle.

Although the reason for the film's title is revealed right at the end, it's final revelation definitely has its wanted effect - an almost audible 'awwwwww' from the cinema audience. The theme of love is present throughout the movie, whether it is in the character's motivations or the whole reason behind some of the subplots present, making this ultimately, a wholesome family movie which entertains throughout.