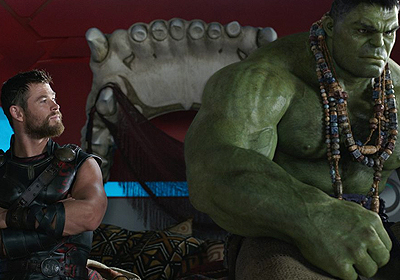 Easily one of the most anticipated films of 2017, Thor: Ragnarok is the latest entry into the hugely popular Marvel Cinematic Universe, Directed by Taika Waititi and it is a blast, uniting Thor and The Hulk, who were absent during Captain America: Civil War in their own intergalactic adventure!

In Thor: Ragnarok, Thor finds himself imprisoned and forced to compete in the Grandmaster's Contest of Champions, trying to get back to Asgard to prevent Ragnarok.

From start to finish it embraces the humour and the fantastical nature of its source material, this is something that I really love and enjoy about the Marvel Studios productions; they embrace their source material, and sure they make changes a long the way; like how in the Cinematic version The Hulk (Mark Ruffalo) is front and centre, but in the comics he has no involvement in Ragnarok what so ever, it just works.

Pairing Thor (Chris Hemsworth) with The Hulk was a stoke of genius on the part of Taika Waititi and the creative team, these two have a palpable chemistry together which is a joy to watch, as arguably the most powerful Avengers, they are very well evenly matched with one of the stand out scenes being the Gladiatorial battle that they share.

Chris Hemsworth is simply amazing, in recent years he has really embraced his comic sensibilities and he has truly made Thor his own, I can’t quite imagine anyone else in the role, he does it so well. Tom Hiddleston’s Loki is awesome too and I am so glad that they gave Idris Elba’s Heimdall more to do in this time around. The addition of Jeff Goldblum as the Grandmaster was genius too, he’s great in the film.

Cate Blanchett is again amazing, able to deliver the menace Hela needs to convey, whilst also just having fun with it. She relishes in bringing the character to life, again her character is an amalgamation of a few characters within Marvel Comics lore but when they are portrayed as well as this, who really cares, it makes sense for the story that the film is there to tell and it does so in an amazing way!

The stand out performance for me was Tessa Thompson as Valkyrie, when we first meet her she is a down on her luck, drunkard with a bad ass quality to her, there is a lot of pain in her backstory that comes out during the course of the film, none of which I am going to spoil here.

The world created in Thor: Ragnarok feels lived in with a stark contrast being that Asgard is all shiny whilst Sakaar is a world comprised of discarded junk from the universe and the music is wonderful, embracing the 80's and rock classics such as Led Zeppelin's The Immigrant Song!

Clocking in at just over 2 hours, Thor: Ragnarok is fast paced, and is the perfect cap to the Thor trilogy, expertly Directed by Waititi whose comic sensibilities really come out, and whilst the film is very funny, it strikes a wonderful balance with the peril that will keep you entertained from start to finish. With films this good in the Marvel Cinematic Universe embracing the fun aspects of the source material and having an engaging story, the phrase 'Shut up and take my money' really does apply.