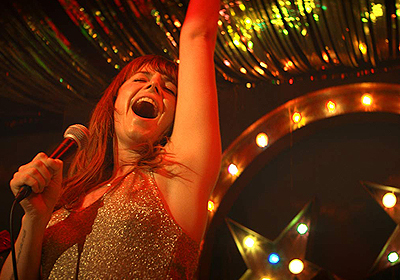 Jessie Buckley was always destined for greatness. First coming to prominence in televised talent contest I’d Do Anything, where her performances were clear standouts, she went on to tackle numerous heavyweight Shakespearean roles, and warble her way through the Menier’s acclaimed A Little Night Music, all of which stood her in good stead for taking on the role of Rose-Lynn Harlan, the exuberant aspiring country (not western) singer at the heart of Wild Rose.

Buckley’s is a virtuosic performance. The hard-bitten Glaswegian whom we first meet being discharged for the umpteenth time from prison is as far removed from the soft-spoken Kerry native as one is likely to get. About the only thing they have in common is their love of music and the lungs of steel with which they express it. But as integral as the songs are to this piece, infusing and pulsing through it as they do through our lead character, there is far, far more to this film than a simple rags-to-riches tale of a frustrated musical prodigy.

Nicole Taylor’s screenplay is a masterclass in economy, effortlessly eliciting tears and laughter and revealing swathes of information in a few choice words. She is helped of course by her stellar cast. Not only Buckley but the incomparable Julie Walters, an inspired choice for Rose-Lynn’s long-suffering mother Marion – too often lumbered with looking after her wayward daughter’s young children – who walks a knife edge between aching compassion and an almost terrifying steeliness. Even as she repeatedly and brazenly urges our hero to give up her dreams of stardom for the sake of her real-world responsibilities, we are never fully able to root against her. Taylor skilfully keeps our allegiances shifting, sympathetic to both the idealistic dreamer and her ruthlessly pragmatic would-be protector.

Their long history is apparent in every scene, whether they are at loggerheads dredging up old scores, or sharing a moment of tender reconciliation. When Marion offers Rose-Lynn an olive branch, conceding that her grandson prefers his long-estranged mother’s mince to hers, her daughter tearfully responds: “I don’t have a mince. My mince is your mince.” Cue waterworks.

Elsewhere we are treated to fabulous work from Sophie Okonedo, the disgustingly affluent yet delightfully naïve wife of a conservatory mogul who employs Rose-Lynn as a cleaner. Initially wrong-footed by her new employee’s uncouth demeanour, her attempts to appear cool and worldly are played to comic perfection and the ever-shifting status dynamic of their relationship provides many of the film’s laughs. We are also privy to a cameo from BBC Radio 2’s “Whispering Bob Harris”, which while entertaining is perhaps the film’s only misstep, Harris evidently being better suited to presenting than acting.

At its heart, Wild Rose is a meditation on finding your own voice, recognising that what you want and what you think you want may be radically different things, and ultimately turning what you might perceive as insurmountable obstacles into strengths. As one character cheerfully observes: “May all your heartbreaks be songs, and all your songs be hits.” In Rose-Lynn, Taylor and Buckley have created a heroine for the ages, constantly striving to do what’s right for her and her children, bereft of any meaningful guidance, and all too often failing both. We see ourselves at every turn. So eminently believable is she that at times it’s hard to accept we aren’t watching a musical biopic of an already established star. Much must be made of Tom Harper’s canny direction, of course, grounding his film so beautifully, but the detail and specificity from all departments is exemplary, and for all the deserved fanfare around its central star turn, this is a consummate ensemble piece.

Which brings us, at last, to the music. As soon as Buckley opens her mouth it’s plain to see why Rose-Lynn pursues her dream with such fervour. Her voice vibrates with passion, running the gamut from trembling fragility to thunderous, brassy power, and the material with which she is gifted is hauntingly, transportingly beautiful. A fitting heartbeat to a film that has heart to spare, and then some.