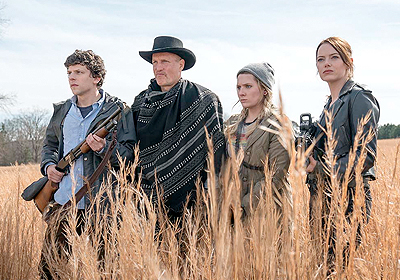 "there are some genuinely funny and high points throughout"

Ten years have passed since Zombieland hit our screens and since then a hell of lot has changed; aside from the obvious changes in the Economy and Politics, in the film world, the horror genre has become over saturated with zombie focused entries, be that serious horror, to the darkly comic or even the romantic comedy.

At the time, Zombieland felt very fresh, since zombies have always been done to death, pardon the pun, nothing had been done in the same way. And in my opinion, this is the problem with the sequel, it's a rehash of a decade old franchise.

The story starts off in a very promising way, our protagonists take the White House by force during a slow motion badass montage set to Metallica's "Master Of Puppets" and it feels like it's going to set up something great. It then falters, the bulk of the plot revolves around Witchita and Little Rock (Emma Stone and Abigail Breslin respectively) becoming bored and leaving their relative safety due to relationship issues. There's the inclusion of some new types of zombie that help to bulster the plot, including the T800 which is a nice nod to The Terminator franchise but feels like it was added only to add a touch of nostalgia.

That's not to say everything is lacking, there are some genuinely funny and high points throughout; Columbus (Jessie Eisenberg) and Tallahassee (Woody Harrelson) reprising there roles from the original coming face with their doppelgangers of sorts (Played by Luke Wilson and Thomas Middleditch) it's very entertaining and the action is brilliantly set up and choreographed throughout. However on the flip side of this, Emma Stone's character feels like she's been written in such a way where she comes off as unlikable throughout, which is a real shame as she was a highlight of the original, this isn't unique to her though as perhaps all of our core cast has not aged well in terms of character. The best new addition by a mile is Rosario Dawson's Nevada, whilst only a small role, she elevates an average role for anyone else and really leaves her mark.

Now you may or may not know that Zombieland was originally going to be a TV Show, elements of this are shown in the zombie kill of the week/month segments in both films. And in my opinion, this sequel would have possibly been better as a mini series. The plot doesn't feel grand or purposeful enough for a sequel that took 10 years to arrive and was promised to be as good or better than the original.

Zombieland: Double Tap ends up being an average film with some definite great moments but not even to bring it close to the feel of the original. However.. perhaps the best part of this film is its mid credits scene, which answers the question of how they were going to include Bill Murray in this? and what caused that Zombie outbreak in the first break.

Plus there's a liberal use of "I'm Alright" by Kenny Logins from the Caddyshack soundtrack with made me physically laugh of loud.. it could be argued this is worth the admission price alone.

Final verdict is 3.5 stars, it's a good but not great follow up.. it nuts up, but doesn't shut up.