Following a successful US launch, Daddy Issues is coming to the UK on 10th August

The Fan Carpet are pleased to present the Trailer, Poster and Photo set for Amy Datnow And Kimberley Datnow Must-See Romantic Comedy DADDY ISSUES, ahead of its Digital release on Monday, courtesy of Alarm Pictures! 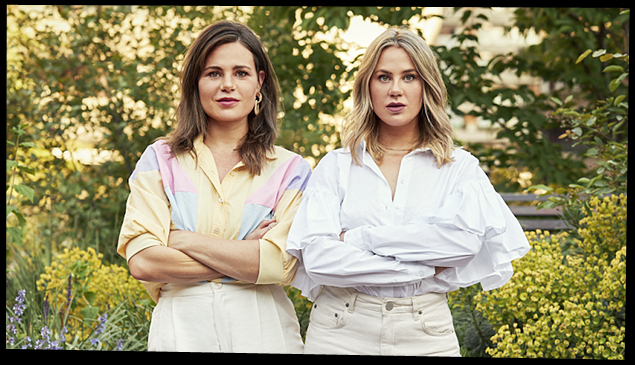 In this quirky, self-aware slice of life comedy, Henri is struggling to come to terms with her father’s death and regaining her prowess as a stand-up comic following her father’s funeral, which she only partly watched via Zoom. She leaves her native UK for sunny LA to take over the family business to do what she feels her father would have wanted. Henri faces issues of trying to fit the mold of her late father’s career, wishes for her life and navigating the dating world. Her fragility becomes more apparent when her focus unwittingly strays from herself and onto bending to the will of others. This leads to the inevitable heartbreak and her re-examining past relationships with dysfunctional ex-lovers as well as with friends struggling with adulthood. Daddy Issues aims to find the love even in the most broken of places. That is, after all, how the light gets in.

Apart from Henrietta’s issues, her friends are also going through relationship problems. There’s Nolan, whose relationship with his girlfriend isn’t going where he would like it to go, and Alice, who experiments with being a sugar mama to make a living. It just seems like this dynamic of friends all share one thing in common — they’re all lacking in certain areas of their lives and are stuck in dependent relationships.

On speaking about the upcoming release, Kimberley and Amy (co-founders of Clean Slate Productions) commented “The inspiration to make this film came after the sudden death of our distant, but loving father. We were living on other sides of the world when it happened; Kimberley working as an actress in Los Angeles and Amy living in Israel and writing for the Jerusalem Post. We would call each other and laugh at our modern dating mishaps, our dysfunctional families and our failure to come of age and navigate the competing demands of our twenties.

As we gradually became a little older and wiser, we grew hungry to see stronger but flawed, three-dimensional female leads grappling with the same issues as us. Being the change we wanted to see in the world, we came up with Daddy Issues. It’s a self-aware dry romantic comedy, mocking the ridiculous habits and stories we heard whilst researching the project. Through making this film, we began to see my own patterns, going back time and time again to the people that treated us badly. We hoped that Daddy Issues could shine a light on these issues by making light of them; finding humor in the darkest of places, taking the audience on the same journey to self-acceptance.”

We hoped that Daddy Issues could shine a light on these issues by making light of them; finding humor in the darkest of places. The crack that lets the light in and inspires people to break their bad habits, which they may not even realize they have, taking the audience on the same journey to self-acceptance.

We wanted to show a range of different types of “daddy issues” from the stories we heard from our friends. When the lead character, Henrietta’s father dies, she moves to LA where she reconnects with her old college friends, Alice and Nolan. We see clearly how these characters are also battling their own types of “daddy issues”: ... Nolan is frightened by the intensity of his single mother girlfriend and Alice is bored from many years of the same relationship and decides to get some extra cash being a sugar baby. The three characters are on their own journeys. Resolving our issues can be a long and solitary road, which we hope the film portrays well.

This is very much a film for millennials. We think it is also a film that can last three generations because the kids and their parents can relate, kids moving home because they can’t afford rents, parents regretting how they bring up their children. In general, there is no support or training given on how to live and be an adult.

I grew up loving and consuming all the amazing romantic comedies of my teenage years including ones from the 90s-2000s and tried to include some subtle homages to those that had inspired me. One example was paying homage to MEAN GIRLS and the infamous “burn book!” with Henrietta's boy box where she keeps a list of her lovers’ phone numbers.

This is a film that isn’t about the girl getting the magical guy as much as it is about the girl realizing that deepening her relationship with herself is where the real magic and healing lies. Happiness is an inside job after all.

DADDY ISSUES IS AVAILABLE TO OWN ON MONDAY AUGUST 10

About Clean Slate Productions
Clean Slate Productions is a London and LA based production house founded in 2016 by a sister duo (the only sister production company in the UK). Kimberley Datnow (Undrafted, Grey’s Anatomy) and Amy Datnow (Margo, Cindy and Sandy) who want to inspire the world with films about funny, strong, female protagonists for the millennial generation hoping that filmmaking can save them years of therapy.

They were living worlds apart in Israel and New York when their father’s passing brought them back together. In a fusion of raw passion and shared DNA, Clean Slate Productions was born. It was only natural their first film would be a family show.