Animation Director Michael Cawood released a new book that gives insights into how he made his award-winning films, the Oscar-qualified ‘The Wrong Rock’ and ‘Devils Angels and Dating’, which has over 19 million views online.

Both of his indie films were made entirely through the virtual studio model and went on to screen at prestigious film festivals all over the world. Cawood became an expert at directing hundreds of artists from all over the world collaborating online, and his Animated Filmmakers book offers valuable tips and tricks on his workflow.

“I wanted to give high value tips to other animated filmmakers that they wouldn’t normally hear from anywhere else,” says writer and director Michael Cawood. “I hope this book makes it a lot easier for others to make their animated projects without unnecessary pain, cost, and stress.” 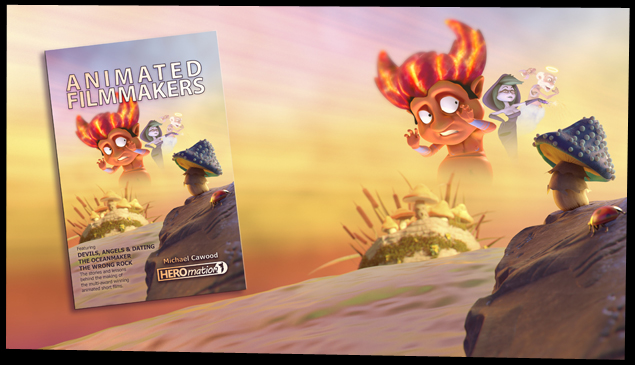 Animated Filmmakers dives into the stories behind Michael Cawood’s many award-winning indie animated films, all made with passion... but virtually zero budget. The book guides the reader through the lessons he’s learned such as winning festival awards, crowdfunding, recruiting talent, and how to run a virtual studio production while avoiding scams and time wasters. Key team members also weigh in on how their time working on these films boosted their careers.

Some of Cawood’s previous credits include Dawn of the Planet of the Apes, Pete’s Dragon, Bumblebee, and Happy Feet. He founded content creation studio, HEROmation, with his partner Julie Pifher. Based in Los Angeles, HEROmation develops films, series, books, and VR games, often utilizing the virtual studio model to benefit from a global talent pool. The company owns the IP of several science fiction books, and has a robust slate of film and TV pitches. Official website: HEROmation.com.

Visit AnimatedFilmmakers.com to watch the films and buy the book, which is available in hardback, paperback, and ebook exclusively through Amazon.

‘The Wrong Rock’ has also been adapted into an illustrated children’s book available on Amazon in paperback and eBook formats.