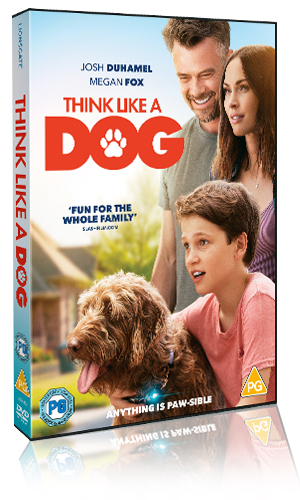 To celebrate the release of THINK LIKE A DOG on Digital Download on July 6 and DVD on July 20, The Fan Carpet have teamed with Lionsgate to give you the chance to win a copy on DVD!

Have you ever wished you could talk to your pet? Well, anything is paw-sible this summer as Josh Duhamel and Megan Fox star in Think Like a Dog, the whimsical family comedy about a boy, his dog, and the science project that will change all their lives forever.

Twelve-year-old whizz-kid Oliver is a tech prodigy who accidentally creates a telepathic connection between him and his furry best friend Henry when his middle school science fair experiment goes awry. The new bond brings Oliver and Henry even closer together, as they join forces to solve problems at school and begin to rekindle his parents (Josh Duhamel, Megan Fox) marriage, with hilarious consequences.

But when a cyber-businessman (Kunal Nayyar) arrives on the scene who will stop at nothing to get hold of the breakthrough technology, Oliver and Henry are going to need the help of a crack team of adorable pooches to save the day...

With fast-paced comedy, adventure and a parade of paw-some pups, Think Like a Dog is the perfect summer holiday treat for the whole family.