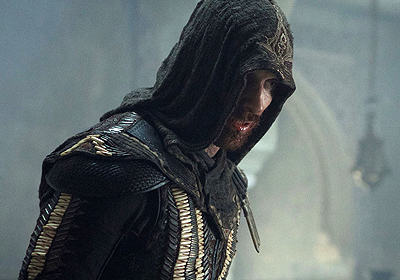 "full of promise with its great cast, but ultimately it fails to deliver a cohesive plot, combined with characters with which we have little or no connection or empathy"

Boasting the impressive cast of Michael Fassbender, Jeremy Irons, Marion Cotillard, Charlotte Rampling and Brian
Gleeson, Assassin's Creed is a film based on a series popular computer games. Like previous films that fall into this genre you have a film that tries to appeal to an audience who may be familiar with the computer games and a general film audience to whom the subject matter is unfamiliar. With this in mind the story can be confusing with reminders of The Matrix with touches of a Dan Brown novel (Dan Brown author of the Da Vinci Code).

Michael Fassbender plays Callum Lynch, a prisoner on death row for murder, having grown up being unstable and violent after witnessing his father kill his mother as a child.

After his "execution" for his crimes, he awakens to find himself in Abstergo Industries, where he is cajoled into helping Sophia Rikkin (Marion Cotillard) and Alan Rikkin (Jeremy Irons) with finding the present day location of the fabled Apple of Eden.

Fassbender is physically connected to The Matrx like device called the Animus – a massive moving mechanical arm via which he experiences the past life of his ancestor Aguilar de Nerha, a 15th century Spanish Assassin who is part of the secret organisation that might hold the knowledge to the location of the Apple of Eden.

Thus begins Fassbender's journey being transported back and forth from the present day to 1492 in to the body of his ancestor Aguilar de Nerha (played again by Michael Fassbender). During this he learns of the Assassin's Creed and The Knights Templar and how they've been at war for centuries and that the war that rages between them is for the Apple of Eden; the key to human free will itself.

In the 15th century we experience a subplot involving Aguiler de Nerha and his partner and romantic interest Maria (Ariane Labed) trying to stop the Apple of Eden from falling into the wrong hands during the Spanish Inquisition.

Jumping back and forth between the two time periods we learn of the past and present intentions of the Knights Templar. In these journey's Callum begins to assimilate the characteristics, strength and fighting abilities of Aguiler returning to the present to face the Knights Templar.

The film is full of promise with its great cast, but ultimately it fails to deliver a cohesive plot, combined with characters with which we have little or no connection or empathy. Set in two linked time periods, it doesn't have the strength of connection the story needs to make that work, so you feel like you're almost watching two separate films.

Neither the Assassin's Creed or Knights Templar are given enough depth to justify their causes. Leading one to apply the tag line, this is what we do, always have done and will continue to do no questions asked. Applied equally to both parties. So I feel an opportunity has been lost to give us a memorable good movie.

When will Hollywood learn that a successful computer game will not translate into a good movie unless you develop characters and scripts, but then it could possibly bare very little resemblance to the original source material, however the outcome could be a better film.

A quote from the film from Michael Fassbender's character Callum Lynch in the film is a very fitting summation of the film, “What the f**k is going on?”