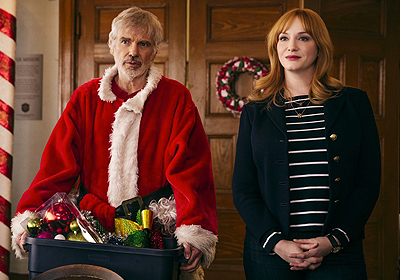 Bad Santa 2 is exactly what the name of the movie suggests, a not so nice story about a middle aged man; Willie (Billy Bob Thornton) dealing with alcoholism, depression, attempting near miss suicide shenanigans, when out of the blue his long lost semi-adopted son, innocent looking Thurman Merman (Brett Kelly) who funnily is a sandwich assistant, comes from out of nowhere and saves him from strangling himself.

Willie then receives a message that he is to go to Chicago to meet his old partner in crime, the bold Marcus (Tony Cox), that actually tried to kill Willie in the past, and help him pull off a robbery for old times sakes.

Willie agrees (he didn't have much going for him anyway) and to his surprise when they arrive in Chicago he is faced with robbing a charity that deals with helping children. Both him and his sidekick have to dress up like Santa's though, and collect money in the street before making the big heist on Christmas Eve.

When eventually he registers to join the Charity he meets his long lost elderly mother (Kathy Bates) who actually works at the Charity and has the same 'naughty' idea. We find out that she is an outlaw herself (duh) underneath her cute granny outfit, downing tequilas and sporting questionable tattoo styles. Obviously Willie and his mother have a very dysfunctional relationship. Some of the highlights of this relationship are the fact the she calls him S...stick annoyingly much too often, and makes fun of his ability to do absolutely anything (like absolutely anything) to name just a few things.

From the beginning to the end the plot is extremely, predictably thin and is filled with all the sexist, racist and politically incorrect jokes that you could think of. This makes it awkward at times to watch, luckily the music and the festive scenery and most of all Billy Bob Thornton's acting skills save the day or in this case the movie.

There isn't any subtext to this film (you wouldn't expect it anyway but one still hopes), any subliminal magical idea or any 'moral' outcome of all this. In the end, a few weird sex scenes later and a couple of punches thrown in the air, they do manage to rob the impressive Charity, much to the hesitation of Willie who has a slight change of heart, after he hears Thurman Merman sing in a children's choir.

Obviously things don't go as planned and the money ends up where it belongs, the wrongdoers are caught and Willie realises the true meaning of Christmas, and ends up a cleaner at the Charity but enjoys some rather impressive perks of the job one of them being having wild sex with the manager (Christina Hendricks).

So hey, if you fancy an easy, flawed, politically incorrect movie, with enjoyable music and pretty nice metropolitan scenery topped with Billy Bob Thornton's decent acting then do go and see it, don't except more though, 'cause you won't get it.