Blade of the Immortal(2017) by Federica Roberti 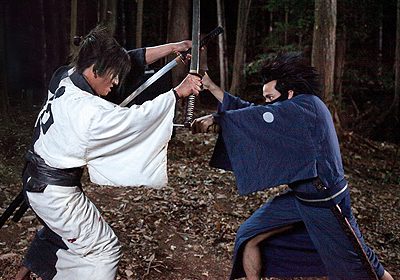 "As an action movie about revenge, Blade of the Immortal successfully entertains the audience by finding the right balance between violence and comedy"

In the fight among dojos, the evil Anotsu is destroying all his rivals by either forcing them to join him or be killed. Rin and Manji have to fight together to honour the memory of her family and for the chance for the cursed man to finally have his chance to destroy evil and regain his soul.

To celebrate his 100th film, Miike brought to the screen the perfect mix between action and comedy. The story is linear and straightforward. The audience has the chance to know Manji’s story without dwelling too much on it. The epic battle that sets Manji’s faith and gives him his immortality is entirely shot in black and white, by removing the colours from the scene, the gruesome sword fight becomes almost poetic and it looks like a dance between all the characters involved.

However, he only employs this technique in the first fight to give a deeper meaning to it. In fact, as an action movie, and one about revenge against a violent group of Samurais, there are plenty more sword fights that can be compared to a Tarantino movie in which blood becomes almost the main character.

Miike doesn’t shy away from showing severed limbs or blood splattering everywhere and the dynamic movements that every actor has to perform during each battle or duel create a chaotic but well organised choreography that still makes these really raw and violent scenes somehow meaningful.

In the midst of all the violence, there is a strong element of comedy that allows the audience to get some relief from one battle to the other. Among all the characters, Manji is the one that brings on the comic relief in every scene. He seems cold and fuelled only by the need to kill.

However, with Rin, he his protective and ready to sacrifice himself to save her, but as a though character, to keep his stoic façade, every time he speaks with her, he only shows contempt and sorrow. It is their relationship that helps in creating the best comedy moments between the two throughout the film and makes the film somehow lighter and less dramatic.

The cast as a whole give an amazing and passionate performance. They are all committed to their characters' stories and what motivates them to fight against one another. As an action movie about revenge, Blade of the Immortal successfully entertains the audience by finding the right balance between violence and comedy.