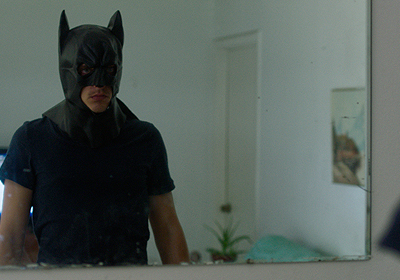 Tim Sutton’s film ‘Dark Night’ takes place during the day of the tragic 2012 Aurora Colorado shooting. When exploring how art can recount shockingly terrible life events, it is a monumental not to mention downright daunting task for any filmmaker and for a cinemagoer to watch, so I was quite anxious as I took my seat in a small screening room.

The film delves into the routine lives of various characters spanning the day of the incident; the victims of the shooting as well as the killer. Sutton offers a sobering and haunting response to the questions and social issues thrown up by the tragic massacre – the gun law debate in the USA, mental health and how it is tackled in society, even the existential crisis faced by humanity on a daily basis. This seeps through into every aspect of the film, from the thin plot of each character’s routine life, scene blocking and the melancholic soundtrack used throughout.

From the darkness of the screen comes only Maica Amata’s (music) ethereal voice, transporting the audience immediately into a pensive mind frame whilst also reminding us that this is an artfully shot film. Sutton, along with cinematographer, Helene Louvart, did a stellar job at compiling the stunning static frames and slow pans that fill the screen throughout the film depicting the lonely lives of these characters. Amongst them a skateboarder (Aaron Purvis), two shop vendor friends (Rosie Rodriguez, Karina Macias), a military veteran (Eddie Cacciola) who clearly is having difficulty adjusting to normal life after war, a troubled young man and an aspiring actress obsessed with fitness and taking selfies (Anna Rose Hopkins) amongst all of these is the character of the killer, very well played by Robert Jumper.

Sutton presents a slow burning sequence of vignettes which intertwine to portray the characters day, mid-way it can somewhat strain on one’s concentration but contains just the right amount of emotive scenes to keep the viewer focused; the subject matter already being a reason to not take your eyes away from the screen. Slowly but surely, the film ties all characters arriving at the cinema. Horrifyingly, the characters excitement is such to watch the film that the camera frames one of the shop vendors pulling her batman mask on, I felt my anxiety building as a viewer to witness a fate which has happened way too frequently in America.

To any reviews which have mentioned that this is a hard slog to focus on for an hour and a half, the last 30 seconds will surely have you gripped in horror as we see the killer approaching the cinema’s emergency exit door - once again, actor Robert Jumper doing a sublime job of presenting a heavily mentally sick person about to carry out an atrocity. This final scene did put into focus the question always in the background of my mind: did it blur the line of dramatisation Sutton had so far, tiptoed very well around? Some may say so, yet, it can’t be denied that this technique did work to amount as the climax of the film and to solidify the critique on American gun culture.

This underlying notion is ultimately what choked me up as a viewer; that a place of joy, thrills, and entertainment ultimately became a death trap for the victims.