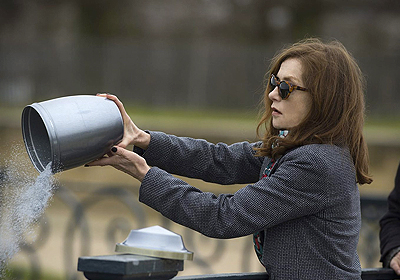 Elle is a powerful psychological French thriller with English subtitles, starring Isabelle Huppert as the uncompromising and resilient Michèle Leblanc. Huppert's character is a sophisticated divorcee living alone and is the co-founder of a successful video game company in Paris.

In her personal life she has strained or damaged relationships with her mother Irène Leblanc (Judith Magre). Her ex-husband Richard Leblanc (Charles Berling), as well as with her son Vincent (Jonas Bloquet), who lives with his manipulative and controlling pregnant girlfriend Josie (Alice Isaaz).

The film opens with a very powerful and distributing rape scene, which is revisited again later on in the film. She is attacked by a masked intruder during daylight hours in her own home. After the assault, Michèle composes herself, cleans up, but decides not to report the rape ordeal, because as we learn later she happens to be the daughter of an incarcerated serial killer, whose crimes she witnessed as a child and that because of that to this day some newspapers and members of the public still believe she may have been complicit in the crimes, even though this assumption about her is incorrect. Wanting to avoid any public dredging up of her past she resumes her daily life.

Michèle runs the video game company with her long term best friend Anna (Anne Consign), whose husband Robert (Christian Berkel) she's having an affair with. At the company we learn she is both demanding and assertive resulting in her male colleagues being either resentful or infatuated with her. This in a work environment that develops video games that are violent and objectify women. At her company a CGI animation from one of the video games of a monster violating and rapping a woman is emailed to everyone with Michèle's face superimposed over the CGI woman's face.

Later she receives a text message from the assailant eluding to the rape and indicating he knows her and is watching her. As the atmospheric tension builds Huppert's Michèle becomes suspicious and she begins to suspect the men around her. Being the strong and resilient woman she is, she prepares herself by buying pepper spray and an axe for self-protection. Also by instructing an employee to track down the source of the email. Laying the foundation for protection and possibly to track down the rapist she is then for a second time at home confronted again by the same masked intruder...

Elle from the beginning with the intense rape scene, is a film by it's very nature that is challenging, uncomfortable, thought provoking and reminds us that we are not one dimensional human beings who can be pigeon holed in to being good or bad and that we are capable of being both. It questions what drives us, what defines us, our character, our actions. Does it offer answers? Should it? The only answer that it offers is that we are individuals on a journey. Elle is an intelligent film that director Paul Verhoeven has brought to our screens with a magnificent performance by Isabelle Huppert. I would give it a five star rating.

Since it was shown at the Cannes Film Festival in 2016 the film has gone on to be nominated and win multiple awards domestically and internationally, primarily for Isabelle Huppert in the Best Actress Category. Currently the film has won 53 awards, together with 69 nominations.