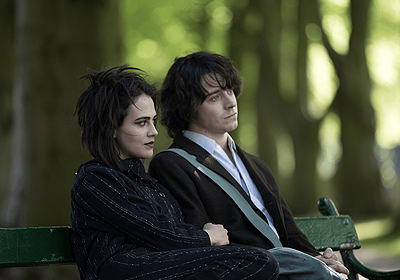 Biopics of musicians always come with certain creative choices, such as whether their original songs will be featured or if the lead will do their own playing or singing. That’s also on top of the usual dilemmas of accuracy and fiction that come with portraying the life of a real person. Fortunately, England Is Mine makes all the right choices, capturing the qualities of the Steven Patrick Morrissey that we know and love and removing his own music to draw emphasis on the inspirations it came from.

Directed and written by Mark Gill as his feature debut, England Is Mine follows the future frontman of 80s band The Smiths in his early life in Manchester. Convinced of his own genius, his trouble is that no one else can see it, and he struggles balancing his own big dreams with the expected routine of settling down into a regular job.

In the film, Morrissey is surrounded by various supporting characters who come in and out of his life, from guitarist Billy Duffy (Adam Lawrence) and Linder Sterling (Jessica Brown Findlay). All would go on to become significant parts of the Northern artistic scene, and they provide vibrant counterparts to the quiet central figure of the film. One downside is that is that these characters do tend to become lost and seemingly forgotten about for much of the film. However, to the movie’s credit, real life is often like that, when everyone is figuring out their future as adults.

The biggest strength suitably comes from its intelligent use of music and literature, done in a similar manner to the thoughtful John Lennon biopic Nowhere Boy in 2009. From Morrissey and Sterling quoting Shakespeare and Oscar Wilde to each other, to classic soul music filling his small bedroom, it provides a perfect explanation as to the influence behind iconic The Smiths songs. It doesn’t feed us the music we expect, but rather keeps the focus entirely on the artist’s development, instead of his success.

England Is Mine is a strong first feature from Mark Gill and benefits from a natural performance by Jack Lowden. It finds its power in an exploration of what it’s like to follow dreams without an end in sight, and wisely portrays the development of an artist, rather than fast forwarding to the stardom that everyone already knows.