Frank and Lola(2017) by Tremayne Miller 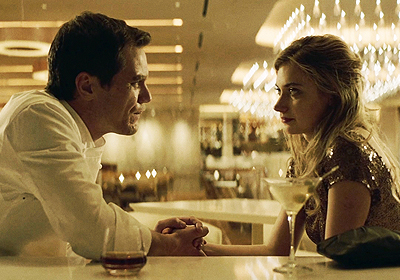 "An authentic psychosexual film noir, depicting the dark side of love"

Pulp Fiction was a revelation in the 90s and brought about a new wave in cinema, the “faux film noir,” which saw the emergence of lots of cheap imitations being made, as they tried to replicate what had become a timeless classic.

Most settled on fetishising all the trappings that come with a romantic crime but failed to tap into the “noir sleaze” at its most raw, its most bare.

However, 2016’s Frank & Lola was not one such film, as it skirted between changeable currents of anxiety and desire.

The opening of the film seeing Frank (Michael Shannon) about to have sex with Lola (Imogen Poots) for the first time. The reality of the situation means we are immediately invited in on the intimacy shared between the two characters, and Matthew Ross, who writes and directs what is his first feature, manages to make each scene fresh, with images of Las Vegas and Paris lit under a retro type glow.

Shannon, not an actor we associate with vulnerability, wraps it together with a moody sexiness. Frank is divorced, yet adamant that he should not mess up again. Lola holds a desire to become a successful fashion designer, and Poots brings a sparkling affection to the role; where we, the voyeur have no reason to believe that she is any different from the picture painted. But, in fact, she is, and thus attempts are made to keep incidents in her life at bay.

At a bar she speaks to a hard-to-read businessman, played by a convincingly cunning Justin Long. She flirts with him just enough until he offers to help her raise her profile in the fashion scene. But in classic noir style this immediately triggers off Frank’s inner jealousy alarm.

Frank eventually learns of the other man in her life, an ageing married Frenchman (Michael Nyqvist), whose sexual jaunts are open and explicit. As a result, Frank goes up for a top chef position at a Vegas hotspot, and is flown across to France to do it, he is on a mission with a ulterior motive.

At the same time we are left with the eternal question that haunts many a relationship: ‘When a romance veers towards a wild side, is it indeed a signal of reality or doom?’ Frank & Lola, like the Tom Ford film Nocturnal Animals, is also about nocturnal animals, as it is seen to perch on the edge of reality and paranoid daydream.