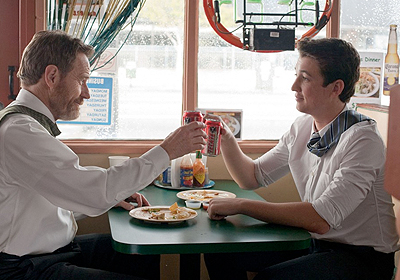 The trials and tribulations that all of us face on the job hunt can be a plentiful well of comedy gold. Everyone will have an embarrassing story of an interview gone spectacularly wrong, or of that awkward first day in which we made such a fool of ourselves that we wanted to find a cave to hide in forever.

Unfortunately, the subject of today’s review, the comedy outing Get a Job, does not drink from this plentiful well of material. Instead, it opts to rely on tired clichés and waste a talented cast who really should know better.

The story follows a young couple, Will, and Jillian who have just graduated from college and are about to embark on their journey into the adult world of employment. Unfortunately for them, the job hunt they embark upon is one rife with problems, as they try to figure out what they want to do with their lives.

Filmed in 2012 but not released until this year, this film has sat on the shelf for four years and after watching it I can see why. It stinks worse than a pair of soiled underpants that have been left out in the sun over a hot weekend.  Miles Teller, Anna Kendrick, and Bryan Cranston lead a talented cast, which the film utterly wastes on a series of unlikeable and useless characters, who largely contribute nothing to this film’s hollow excuse for a plot.

Miles Teller’s Will comes off as an annoying spoiled idiot, who seems to expect jobs to be handed to him and acts like a rude unprofessional child which often leaves you feeling no reason to root for him in the end. I honestly wanted him to fail in his efforts to get his dream job, that’s how much he annoyed me.

Anna Kendrick’s Jillian feels largely pointless as a character, with her story arc barely covering 20 minutes of screen time. This lack of impact is not helped at all by Kendrick’s rather phoned in performance and her relatively small amount of screen time, which is surprising given Kendrick’s prominence in the film’s advertising.

Christopher Mintz-Plasse as Will’s friend Ethan is easily the worst and most despicable character, coming across as a sort of walking public information film on the dangers of online stalkers. With his recurring plotline of his newly developed app which essentially allows him to stalk people, coming across as creepy and humourless, no matter how many times the film tries to make you think it’s funny.

The only cast member who manages to redeem proceedings even slightly is Bryan Cranston as Will’s recently unemployed father Roger. We follow his struggle to get back into work while constantly being confronted with rejection, with Cranston making the character likeable and sympathetic. A small speech that Cranston delivers about the trials and eventual triumph of getting a job interview is a rare highlight in this otherwise dire film.

Perhaps the worst offence that this film commits above all else is that it doesn’t come across as funny at all, it’s just really boring instead.

None of the jokes in this film land, with the gags about pampered millennials shocked to realise that the real world is much more cutthroat than they thought, feeling so dated and old they might as well be bloody fossils.

This dullness is not helped by the fact that the plot is the most clichéd, by the numbers, garbage that has been done a hundred times before and with much more skill. With the film’s numerous plotlines being resolved in such a predictable and tedious fashion, that I just couldn’t bring myself to care about them by the end.

Quite simply Get a Job is an awful film that should have stayed on the shelves where no one would have to endure the pain of having to sit through it.

The film’s jokes are poorly written and horrifically dated, largely rendering the film about as funny as receiving a colonoscopy or, as one scene in the film reveals, drinking a jar of Deer seamen.

The main characters are largely annoying and unsympathetic throughout, utterly wasting the talents of an otherwise talented cast, who thankfully have gone on to do bigger and better things since this turd was made. Avoid this pathetic excuse of a “comedy” at all costs.