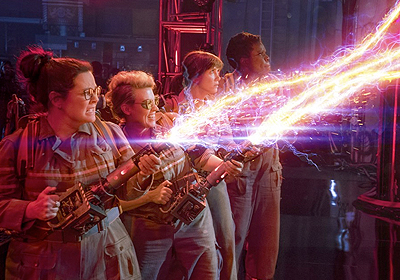 After a year of constant negativity buzzing around this production, mostly accusing Hollywood of creating another unnecessary remake and the enormous outrage over the fact that the main cast are an all female ensemble, Ghostbusters succeeds in bringing to the screen a fresh and new take on a franchise that has always been considered as a milestone in contemporary cinema as well as in the geek community.

Plot wise the story is pretty simple. Dr. Erin Gilbert (Kristen Wiig) is a respectable Physics Professor at Princeton, her career is going just fine with a promotion looming. However, her world changes dramatically when Abby Yates (Melissa McCarthy), Erin's old college best friend, decides to bring back into the spotlight an old book they co-wrote on their theories about ghosts and how they can manifest themselves on Earth.

After being approached by the owner of one of the most historical places in New York because of a paranormal phenomenon and consequently being attacked by a real ghost, Erin, Abby and her new collaborator Jillian Holtzmann (Kate McKinnon) decide to work together and form a task force to investigate and see if their old theories might be leading to something real.

During one of their emergency calls under the subway station, the team, with the help of Patty (Leslie Jones), an MTA operator, discovers the reason behind all these paranormal goings on; Someone in the city is building a powerful device to amplify the paranormal activity in the city and create chaos and destruction.

Erin, Abby, Jillian and Patty do their best to fight against the paranormal and save the city from its inexorable destiny.
When it comes to Hollywood, lately, it seems that the cinema industry is producing more and more remakes.

While it can be considered as an easy choice, the general public always tends to forget the huge backlash that a reboot often carries, this has been the case for Ghostbusters; in fact, ever since the news came out of an all female cast being chosen for the new movie, the fanbase of the beloved original started to express their biased and negative opinion about the film, without even knowing how the movie was going to turn out.

The original Ghostbusters graced the screen 30 years ago and took the world by storm, this version of the Ghostbusters is Directed by Paul Feig and plays up the comedy aspect of the movie, which in my opinion is explosive.
What Ghostbusters does is to wear thin the gap between comedy movies made by men for men and the ones made for women, the purpose of this project was to make the audience understand that, when it comes to action movies, both genders enjoy the same things: hilarious jokes, innuendos and pure entertainment.

The four main characters are strong women who want to be taken seriously and when no one believes in them, they just keep going and save the world by relying on themselves. However, behind their strength there is always a small dose of insecurity which makes all of them well rounded characters and it helps create some of the most amazingly funny situations.

Going in to see this movie with the idea of comparing it with the original and the success of the franchise is a terrible mistake, I urge you to go in with an open mind, which makes the experience of seeing this remake even better.

The directing and, most importantly, the special effects are spectacular, the cultural references used in most of the jokes make the comic aspect even more hilarious and the audience is capable of getting more involved in the story.
What is even more impressive is the reversed use of the female gaze by adding to the main cast a male character who is just there to be the eye candy for the women; Chris Hemsworth fulfills that role beautifully and he is also capable of surprising the audience during an unexpected turn of events in the film.

The quartet of McCarthy, Jones, McKinnon and Wiig work together with great chemistry and portray their characters effortlessly. Their comedy timing is off the charts and their facial expressions alone are hilarious and entertaining, bringing a special quirkiness to their characters' personalities.

Another great aspect is the fact that to the most attentive audience, throughout the film, the old characters from the franchise make an appearance to pay a tribute to the original movies.

All in all, Ghostbusters is a highly entertaining movie and its success will surely come after a battle against the misogynistic opinions expressed by the original male fanbase, which underestimates the final product based solely on the fact that the cast being used here are female instead of their iconic male counterparts.