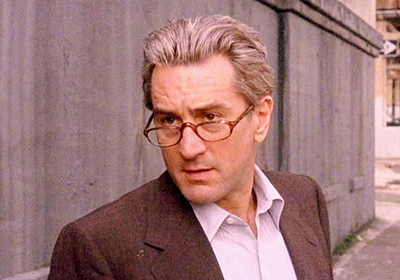 "fascinating fact based story, amazing performances, and a truly pitch-perfect blend of style and substance all mix together to make Goodfellas the truest example of a cinematic masterpiece"

Martin Scorsese has given us many iconic film moments and characters that have established him as one of the greatest and most influential directors of all time. While he has made many great films over his 40 years and continues to do so, his best film to me without a doubt is his gangster masterpiece Goodfellas (1990) which is not only the greatest crime film of all time but it is quite possibly the greatest film of all time.

The film chronicles the true story of mobster Henry Hill and the various colourful and violent characters that he associated himself with during his time as a member of a ruthless and fearsome crime family from the 1950s until the 1980s, in which he took part in all manner of killing, extortion and thieving.

Ray Liotta has never been better as Henry Hill, a fascinating character who joins the mafia not only because of the allure of money and status, but mainly because he feels that it’s the only place in which he truly belongs, which makes his eventual downfall and betrayal of his associates all the more tragic for him.

Scorsese regular Robert De Niro gives one of his best performances as Jimmy Conway, with the veteran actor further demonstrating why he is rightly regarded one the greatest actors ever, with his best scenes managing to convey a complex mind at work while letting us know exactly what he’s planning often without needing a word of dialogue.

However, it is Joe Pesci’s Oscar-winning performance as the violent and psychopathic Tommy Devito that really steals the show, with Pesci being utterly terrifying in the role with his every moment being a nervous tension filled endurance test that has you gripped. The standout moment is obviously the now iconic “Funny How?” scene in which Tommy aggressively questions as to why Henry finds him so amusing, the entire sequence really drawing you in, leaving you captivated and terrified of just what Tommy might do.

The overall presentation of this film is something truly beautiful to behold with some of the finest cinematography ever committed to film, with the much discussed single take Coco cabaña tracking shot certainly being a standout. However, what makes the film so brilliant to watch is how the visuals are expertly mixed with the music and narration, with Scorsese picking the absolute perfect songs to add that extra punch to certain moments. My personal favourite is the use of Donovan’s rather peaceful sounding 60s hit “Atlantis” to score the particularly brutal beating of Billy Batts by Tommy and Jimmy, with the music almost synching up with every vicious kick and punch they inflict.

What’s not often discussed about the film is the, for the time, realistic and honest way in which it portrays life in the Mafia which before had most notably been portrayed as something of a stoic and honourable organisation in The Godfather trilogy. However, this film blew away this notion by showing these gangsters for what they really were, greedy thugs and vicious killers. In capturing the violent aspect of the gangster life, the film holds little back with the violence often being shocking and brutal, with the film’s opening moment featuring an exceptionally brutal killing.

I honestly believe Goodfellas to be a better film than The Godfather which some might consider tantamount to blasphemy. A way to compare the two is to think musically, The Godfather is like an opera, it’s very long; it’s very grand and it presents a tale of honour and loyalty in a crime family throughout the 20th century over 3 very long films. By contrast, Goodfellas is like a rock album with it racing through track after track, racing through nearly 30 years of backstabbing, killing and thieving with a lighting quick pace and razor sharp precision and does all of this within a single film. While Goodfellas is a much shorter ride, in my view it’s a much more rewarding one.

A fascinating fact based story, amazing performances, and a truly pitch-perfect blend of style and substance all mix together to make Goodfellas the truest example of a cinematic masterpiece, and it’s a masterpiece that I feel that everyone should see at least once before they die.