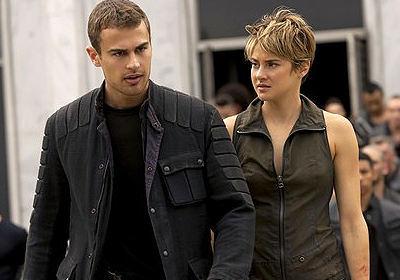 Adolescent dystopias are the latest genre de nos jours within the highly lucrative YA fiction market and this resultant success has cumulated in several major film franchise adaptations over the past few years with momentous till ringing success.

Moving on from the tediously lengthy exposition of its predecessor, Insurgent is the swift action packed sequel from Victoria Roth’s bestselling trilogy which returns to the rubbled ruins of a post-apocalyptic Chicago.

Following straight on from Divergent’s murderous finale, Insurgent opens with a breathless Tris (Shailene Woodley) and her succinct band of allies on the run from tyrannical Erudite leader Jeanine Matthews (a sorely underutilised Kate Winslet).

Seeking refuge with Amity leader Johanna (a fleeting Octavia Spencer) and her Amish like clan, the now restless fugitives set about devising their next tactical move before the local militia arrive.

Haunted by an abundance of guilt ridden nightmares, Tris logically does what anyone else in a life changing situation would do, by spontaneously shearing off her own hair with immaculate salon quality results (is there anything this gifted Divergent can’t do?!). With a new creative team at the helm including director Robert Schwentke (Flightplan, RED) alongside screenwriting trio Brian Duffield, Akiva Goldsman and Mark Bomback this quartet have orchestrated a heavy abscission on Roth’s source novel.

In a world where only a small handful of inhabitants are over the age of 35, the continual youthful parkour action sequences become an incessantly distracting filler which covers up the incongruously convoluted plot.

With the fatuous narrative being more fragile than a swaying Jenga tower, Woodley sweeps in with her ever charismatic presence whose controlled serene-like grace radiates from the screen.

Any character development has been sorely omitted from the to do check list, with Theo James’ Four sulking around in the background like a handsome yet forgotten stand in. Whilst Insurgent is no Hunger Games, Woodley’s integral central protagonist provides a sincere beating heart in this otherwise flat lined franchise.