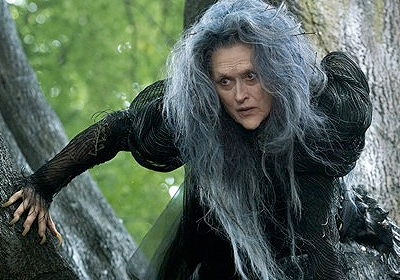 "has captured the essence of the stage play, so even though it’s translated onto the big-screen and at a shorter length, we don’t lose anything from the story"

As someone who isn’t usually a fan of musical to film adaptations, I was surprised at how well this managed the feat.

Director Rob Marshall has captured the essence of the stage play, so even though it’s translated onto the big-screen and at a shorter length, we don’t lose anything from the story and the style still screams Sondheim. It is beautifully shot and the singing flows as naturally as if it were speech. It’s also pleasing to see how closely they keep to the original Grimm Tales storylines for each character; holding on to the darkness that is weaved into each plot.

The original storyline of the childless Baker and his wife (played by James Corden and Emily Blunt) does well to tie all of the story threads together, as well as bring humour into the film. Anna Kendrick’s contribution as Cinderella stands out almost as much as her incredible singing, while Meryl Streep’s witch nearly steals the show with a stunning performance.

That said, the characters are all a little one dimensional and I would have liked to have seen a bit more depth behind them. Johnny Depp as The Wolf was characterised, but far too playful; you want him to be frightening and much more of a trickster. With this in mind, the original Grimm Tales stories are borderline brutal and feel that this could have been conveyed better with his character. Instead, it merely insinuates, and does this throughout most of the film.

However, Chris Pine as Prince Charming is a very pleasant surprise. Firstly, I didn’t even know he could sing, and apparently neither did a lot of people, including Rob Marshall! Not only can he belt out a tune, but he does it so very well and the duet between the two princely brothers is my favourite part of the entire movie -- it’s beautifully shot, well performed, and actually very funny. While both Pine’s character and his brother’s (Billy Magnussen) were (again) one dimensional, it actually works in this instance, because they’re meant to be shallow, and to quote Prince Charming; “I was raised to be charming, not sincere.”

Daniel Huttlestone captures Jack perfectly. However, Mackenzie Mauzy as Rapunzel is rather flat. Also, while Lilla Crawford sings fabulously as Red Riding Hood, she doesn’t quite capture the essence of her. She opens very strongly while interacting with the Baker and his wife, but from then on the character seems a little emotionless and deadpan.

Overall, Into The Woods is a good film, but isn’t outstanding. However, it still remains one of the best and strongest musical to film adaptations I’ve had the pleasure of seeing.