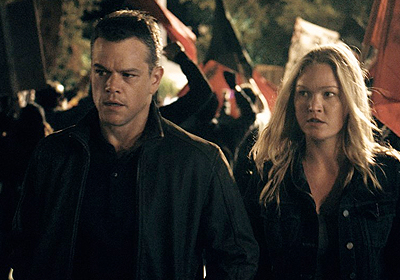 "achieves the same standard as the original trilogy, and gives the audience exactly what they would expect from a Bourne movie, no more and no less"

Matt Damon and Director Paul Greengrass, who led The Bourne Ultimatum and predecessor The Bourne Supremacy, didn’t want to return to the franchise until the script was good enough, and this patience has paid off. Greengrass, with the help of Damon, has co-written Jason Bourne with Christopher Rouse and it is in the exact same vein as the original trilogy so audiences who loved them will be satisfied here.

Jason Bourne ignores the existence of 2012’s The Bourne Legacy, which starred Jeremy Renner, and picks up several years after Ultimatum left of – Bourne has a better idea of who he is, but there is still a lot of his past he doesn’t remember, so he comes out of hiding in Greece when former CIA agent Nicky Parsons (Julia Stiles) hacks into the CIA database and steals information on their black ops programs, which contains powerful details about Bourne’s enrolment in the Treadstone operation.

The CIA, featuring director Robert Dewey (Tommy Lee Jones) and cyber analyst Heather Lee (Alicia Vikander), learn of the hack and rapidly a cat-and-mouse chase ensues, like most of the other movies, with the CIA sending an assassin (played by Vincent Cassel) to kill Nicky and Bourne, while he tries to uncover more secrets about his past.

The plot is very similar to the previous movies and all the signature elements such as the action, dialogue (or lack of), tone and camera work are kept intact so it feels exactly the same as the others. Thankfully, Jason Bourne achieves the same standard as the original trilogy, and gives the audience exactly what they would expect from a Bourne movie, no more and no less.

You wouldn’t think Damon hadn’t played CIA assassin Jason Bourne since 2007’s Ultimatum, even though he looks older and more weathered. He easily slips back into the strong and silent character and despite the nine-year gap; he is still as fit and believably kickass as ever. Bourne doesn’t talk much, but it’s not necessary at all and he carries the movie with ease. Jones was darkly funny as the morally ambiguous CIA Director, Riz Ahmed was a highlight as a conflicted tech billionaire, but Vikander’s casting felt off; she is a brilliant actress, her recent Oscar can attest to that, but the role should have gone to someone older with a more palpable air of authority.

Plot aside, the action is spectacular, as to be expected. Once it gets going it rarely lets up and it is just chase after chase, fight after fight, with incredible tension and choreography. Unlike some action movies, the sequences are logical and move the story forward rather than feeling like they are just strung together without any real reason. All of those scenes are very cool to watch – from a bike chase in Greece amid the unrest, super-speedy hand-to-hand combat, which build up to the showstopping finale on the Las Vegas strip.