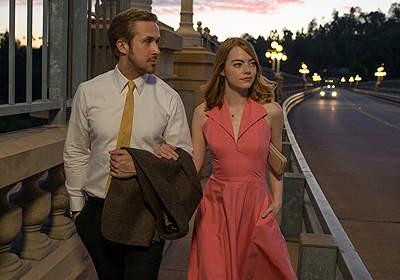 This nostalgia-infused, throwback musical to 20th century Hollywood feels something of a forgotten art in a time audiences enjoy loud, sexy actioners from Michael Bay; leaving Damien Chazelle’s cosily snug singathon to whisk us away to a simpler and less stressful few hours of escapism.

But all is not as it seems, even after its United Colors of Benetton style opening number, suggesting we’re in for a multicultural journey through jazz and its influences that precede white protagonist Sebastian (Ryan Gosling). And that’s not to imply La La Land is an anti-black movie; it’s just one that funnels a passionate and pleading message of how important jazz culture is through a white voice, leaving its black support on the peripherals. Essentially this debate doesn’t hamper the film on its fundamental levels of crafting and delivering a vibrant, catchy musical tale of whirlwind romances and depth-sinking heartbreaks, but it could have strengthened its position somewhat by acknowledging a stronger black voice.

With politics pushed to one side, Seb (Gosling) meets aspiring actress Mia (Emma Stone), whereby a series of awkwardly cute flirts take place before the pair fall head over heels for one another, thus marking the point where we begin to delve into the complexities of each character.

Together they’re a force of nature as the on-screen chemistry sizzles, just as it did during a previous team-up in Crazy, Stupid, Love. Gosling’s got the credentials for a typical leading man: the looks, the style, the charm and charisma, only this time he adds his vocal chords and the odd not-too-complex dance routine. Stone, however, feels much more suited to the pace and demand of the spontaneous song and dance, delivering a particularly memorable number in one of the film’s standout moments.

At times, Chazelle’s direction is so floaty and seamless you don’t even consider the complexities and painstaking planning behind its longwinded takes and how they’ve been achieved. The film – in both storytelling and song writing – works surprisingly well and presents a collection of songs and instrumental scores that will grow on you the more you see the film and listen to the soundtrack.

There’s plenty of Oscar buzz surrounding La La Land; much like Chazelle’s last film, Whiplash. The performances here are at the other end of the scale: instead of being unbearably taut and intense like Miles Teller and J.K. Simmons, Gosling and Stone often exude chirpy yet loveably likeable auras that work so smoothly within the contrived aesthetic of their musical world. We know its block colours, picturesque landscapes, and architecture is there for a purpose, and, just like watching a stage show, it’s extremely easy to forget the crew-made construction of its artifice as you find yourself drifting along with our leads in what is an energetic and ultimately touching roller-coaster ride.