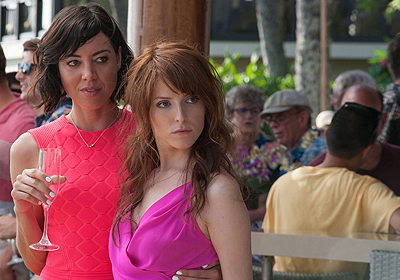 "This isn’t a nifty battle of the sexes, it’s just highly embarrassing"

"Based on a true story…Sort of" When such words appear on screen before you, any hope you originally had when walking into the cinema, clutching to the thought this wasn’t going to be ‘that’ bad; disappears in an instant. Of course, with a film like this, the word awkward doesn’t even come close and this certainly has its fair share of sinking into the seat, cringe-worthy moments. Yes it’s bad, yes these actors are so much more than this script but this is without a doubt, atrocious and awfully funny.

So here we have it, brothers Mike (Adam Devine) and Dave (Zac Efron) seem to ruin every family celebration they have ever been too, ever. Oblivious to such antics, now it’s not just anyone’s wedding they will be ruining, it’s their little sister Jeanie’s Hawaiian getaway. Afraid that the venue could possible catch fire or come tumbling down, Jeanie with the support of their parents give them an ultimatum – bring respectable wedding dates, or don’t come at all.

After Mike has a two year old tantrum, the two realise that they need to impress their parents and find some ladies worthy of their time. Where else to find them, other than on Craig’s List? After their add goes viral, drunk and depressed waitresses Alice (Anna Kendrick) and Tatiana (Aubrey Plaza) think this is great opportunity to get a free holiday and ultimately get their groove back.

Above all else this appears to be a complete rip off of Wedding Crashers. An attempt at a riskier, pushing it when it comes to a 15 certification when it comes to certain aspects (it seems all you need to do to gain an 18 classification is say the C word); yet cleverly cheesy camera angles and cover-ups are strategically placed ensuring 15 year olds bums are firmly on seats. All seems to be going well until they spot the fact that these two prim and proper girls can’t keep their act up for long. Messing with the bride days before her wedding is one thing and when the cute and innocent Alice gives Jeanie the drug trip of a lifetime things, literally come tumbling down around this troublesome foursome.

Despite, the various laugh out loud moments, Mike and Dave Need Wedding Dates is the same old formula just being hashed out time and time again. If only there were as many hilarious moments minus the sickeningly clichéd storyline and characters, perhaps this would have been a much smarter film – but sadly it is anything but smart. It’s silly, oh so silly with just enough sarcasm to keep anyone (and there is quite a few) whom actually like to watch something they haven’t seen before at bay. Where they really tried to shine and failed miserably, was trying to give this film meaning. Despite all the characters having some sort of grown up revelation. Trying to be as thoughtful as it is humorous simply didn’t cut it. This isn’t a nifty battle of the sexes, it’s just highly embarrassing.

Whilst this isn’t anything we haven’t seen Efron do before, Mike & Dave Need Wedding Dates certainly succeeds in shocking you and is the cause of many hearty giggles. Out on Wednesday 10th August – catch this beyond stupid duo, being well…stupid.