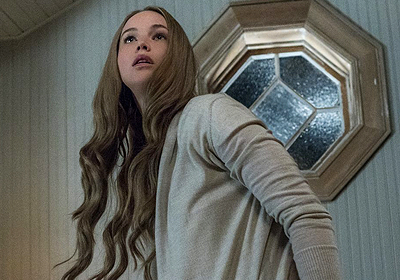 "This is the story of creation, the story, as the one in the bible"

In the lead up to the release of Darren Aronofsky’s newest film Mother! very little was given away. The press was vague, the trailer enticing but lacking any coherent narrative and the posters equally as withholding. However, after seeing it I came to think that this was less of a ploy to generate intrigue but a direct representation of the film itself.

Mother! is told from the perspective of Jennifer Lawrence’s character. She is the unnamed female counter-part to Javier Bardem’s poet. The two are a married couple inhabiting his childhood home, which had previously burned down in a mysterious event leaving him with nothing but a crystal – a literal interpretation of his ability to create beauty from destruction. We join the couple a few months into the painstaking restoration of the house, which Lawrence undertakes alone while Bardem swans about looking for inspiration for his next masterpiece. Over a period of nine or so months, we watch as his adoring fans invade the inner-sanctum of their home. Ed Harris is first to enter upon the scene, followed by his wife Michelle Pfeiffer, his sons (one of whom is played by Domhnall Gleeson) and then by a hoard of unnamed fanatics.

With each turn the story becomes more convoluted and less logical. It starts as a slow descent but then the pace quickens till you find yourself at the precipice of madness not quite sure how you or the film made it there. Now the film is well shot and the visuals are certainly arresting but it’s hard to get away from how wild and confusing the plot is.

I couldn’t help but find it an awfully self-masturbatory piece. Is this Aronofsky proclaiming in maddened flashes how much of a genius he considers himself? It was sexist, nonsensical and utterly mad. A pointless rollercoaster through the ego of a filmmaker too blinded by his own sense of mastery to see how bad the film he had created is.

The violence committed upon Lawrence in this film seems gratuitous. She is defined against all the men in the story – brought to life by Bardem to whom she is wife, goddess and muse. She painstakingly restores the house, which is absolutely gorgeous, for it to be destroyed so Bardem can revel in the beauty and success of his own less tangible creation – a poem. She is beaten and abused, called a bitch and a whore. She then becomes a mother, once again for more pain and violence to befall her. She is put through the works for no reason than to appease Bardem’s growing ego. She is the poor woman behind the “great” man and boy does she pay for it. The whole story seems one of unnecessary agony inflicted upon a passive character who does little to stop it.

Mother! is a film with no logical narrative or structure, which is needlessly violent and gory and extremely baffling – this was my opinion in the moments after seeing it. Then I thought about the story, the seemingly nonsensical series of events, and things started to make a bit more sense. This is the story of creation, the story, as the one in the bible; Bardem is God and Lawrence is mother, that of nature and Christ.

The story of Eden collapsed plays out followed by the coming of Christ and then a future prediction of a destroyed earth. As I decoded more of the imagery it seemed to make a lot more sense – dare I say I began to think it might even be brilliant? I’m not sure. It seems to be more logical now but I would need to see it again to be sure whether this film is actually completely awful or sheer genius… I’ll get back to you on that.